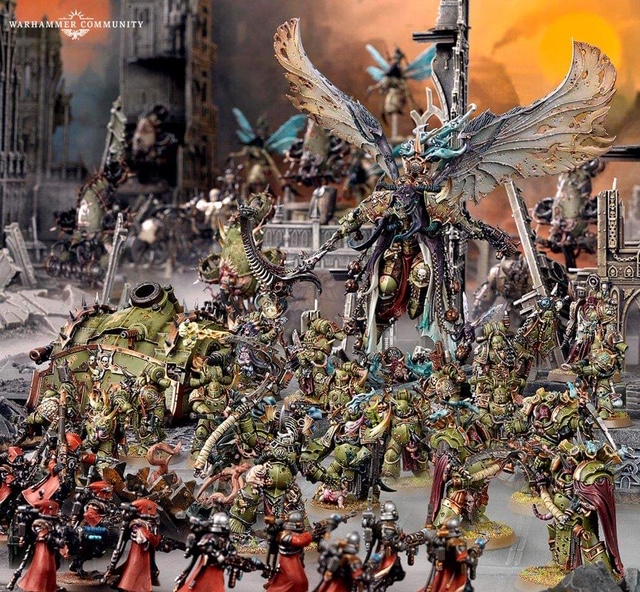 Death Guard is one of the prominent forces in the new War of the Spider release. They got lots of new Stratagems, Relics, and the ability to further customize detachments by dedicating them to one of seven Plague Companies. Joining War of the Spider: Death Guard Tactics Part One, today, we’re going to be looking at the Death Guard Tactics of the remaining 4 Plague Companies with some tips to get you started writing lists!

Summon your way to victory. Summoning isn’t new to 8th edition, but it is fair to say that 8th edition summoning has been rather tame. Summoning not only requires points, but it also requires the summoner to stand still for the turn. Add on the fact that summoning can be dangerous and has a failure rate, and you’re left with a very underwhelming ability.

The Wretched flip this entire equation on its head thanks to The Rotted Veil Stratagem. It allows you to summon even if you’ve moved, and it makes the summon attempt consistent and safe. This is especially important with how 9th will be changing the rules for building armies. Summoning allows you to still field one detachment while fielding two armies, which can make for some really potent options. Although the Death Guard powers don’t work on Nurgle Demons, Nurgle psychic powers will work on Death Guard demons. With units like Possessed and Plagueburst Crawlers carrying the Demon keyword, the options are endless.

For example, consider the Daemonkin Ritualists specialist detachment. It’s a tool available to Chaos Space Marines, but not Death Guard. However, you can build your own by including some Possessed and summoning in a Poxbringer. Then using that Poxbringer to cast Virulent Blessing. Your Possessed don’t deal with Mortal Wounds, but they cause lots of damage and can’t be shot thanks to Cloud of Flies.

Of course, you could also summon in some Plague Drones if you wanted a fast melee threat or some Plaguebearers for cheap objective sitters. You should plan around which units you want to summon at list creation and write your Death Guard list around that. With 9th making detachments cost CP instead of granting them, being able to summon efficiently will be a game-changer.

Maximizing The Ironclot Furnace. Every Plague Company has a unique Relic, and the Poxmongers are no different. The Ironclot Furnace makes all Demon Engines receive a 4+ Invulnerable Save while they are within 7″ of the bearer. This is a very powerful effect that demands building around.

Plagueburst Crawlers are notorious as being some of the most durable models in the game, and a 4+ Invulnerable save makes them even tougher. However, if you leave them in a corner and shoot their cannons all game, you won’t benefit much from this. You need to make your opponent try and remove your Plagueburst Crawlers to take advantage of the Ironclot Furnace. Luckily, War Of The Spider has also given some nasty improvements to Plague Marines, turning them into serious threats at all ranges.

The Virulent Rounds Stratagem lets you turn your Boltguns into Plague Weapons. As a bonus, it makes natural Wound rolls of 6 become AP-4! With Relentless Volleys, you can make those same Bolters become Rapid Fire 2, doubling your firepower. Next, if your Warlord takes the Arch-Contaminator trait, these Plague Weapon bolters re-roll all to wound rolls! A full squad of 20 Plague Marines can spit 80 bolter rounds that re-roll to wound and become AP-4 on 6’s to wound. That’s pretty nasty!

Your durable Plagueburst Crawlers can shield your Plague Marines from shooting by denying vision. Some parts of your opponent’s army will be able to see still, but you’ll make it difficult for your opponent. If they try and remove your Plagueburst Crawlers to shoot at the Plaguemarines, they have to chew through that 4+ Invulnerable Save. The best part is that if they try and sneakily engage you in melee, your Plague Marines can charge in with their Plague Knives. Trench Fighters make them have 3 attacks each, and the Sanguous Flux Warlord Trait makes them AP-1 against Infantry. This would take two Warlord Traits, which is a problem. Luckily, the Plaguechosen stratagem solves this problem by letting you give a second Character a Warlord Trait. Wrapped together, you have a potent start point for any list.

The Ferrymen are one of the more disjointed companies. They have a few random buffs and options, but no game plan for it. Their Relic, The Ferryman’s Scythe, isn’t bad as it swings at Strength 8 and can cause Mortal Wounds. On Droning Wings can extend Aura ranges an extra 7″, which is powerful with the Arch-Contaminator Warlord Trait and Plague Surgeons. Getting to re-roll 1’s on your Disgustingly Resilient rolls might save a model or two, and pushing it to a 10″ range helps. Vermid Whispers improves a unit of Blightlords in the Shooting Phase, which is okay. Most threat from Blightlords comes from their melee weapons, so even this Stratagem is a bit of a miss.

This leaves us with your Warlord Trait, The Droning. It makes Morale tests for your opponent difficult, which in 8th isn’t a big deal. However, with the previews for 9th showing that once a unit fails a test they start crumbling as the game goes on, this trait might have some traction in 9th. You can also reach 19″ with On Droning Wings for the Warlord Trait, which is nice.

Our last Plague Company is Mortarion’s favorites, and they have a rather unique set of options. Their Death Guard tactics They have an incredible upgrade for a Plague Spewer in Vomitrex. Letting you turn a Demon Prince into a flying ranged threat. They also have an upgrade for a Plague Surgeon which improves his Tainted Narthecium. Instead of just re-rolling 1’s, you reroll 1’s and 2’s. This makes Plague Surgeons a decent inclusion for your infantry.

While your Plague Surgeon is busy keeping your Infantry alive, you can use a Demon Prince with Vomitrex and three Foetid Blight Drones to flank your opponent. The Demon Prince is a double threat, just like the Blight Drones. Three Heavy Blight Launchers and Vomitrex will wipe a unit out. The Plague Probes and Demon Prince can kill a second in melee. If you want, you can give one Drone a Fleshmower for a little more melee punch instead. Either way, you have an aggressive flying threat that can move fast across the board. Once you engage, you can surgically start removing threats. This is a level of speed that’s rather uncharacteristic for Death Guard, and it will catch some players off guard.

Most of the Death Guard Plague Companies have some serious game. As a bonus, they all offer distinct playstyles as well. In conjunction with the new Stratagems and Relics, Death Guard is in a great place. More than ready for the Top 5 Changes to 9th Core Rules