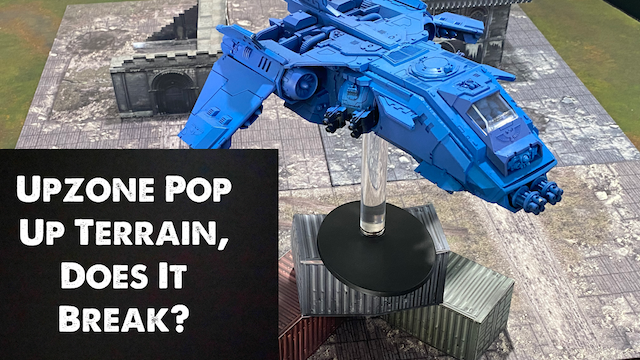 We did a thorough review and test on the Upzone: Pop-Up Terrain System by Everything Epic. I think any war-game player will want to check this out! We tested out its strength, durability, ease of setting up & breaking down along with several other factors.

Now, you can’t properly test a war-game board without playing a War-game on it. That’s why we even played a fast 1k game of Warhammer 40k on it! That battle report will be coming out shortly after this article.

I’m not going to lie, the set up for these shocked me! I couldn’t believe how fast and easy these are. You can literally set up a table that is ready for play in under 5 minutes. This saves so much time when all you have to think about is where the objective goes and how to place the board mats.

With that said, some missions have objectives in specific places that can not be in or on the terrain. So these may interfere with that if you want to play those specific missions.

The first thing I have to say is they really thought out the best way to have these pop-up, lock in place, and stay secure. All you have to do is open up the board and pull the extra firm tabs through their designated slots and interlace them. It’s really simple and surprisingly durable!

I really do love how convenient this is, you can tell they thought this out while designing it. The fact that the terrain pops right up into the proper shape, hold their placement, and can get used multiple times shows how good the engineering behind these are. Yes, we did test the endurance of these…

I opened and closed these boards several times to test and take different shots with them. I will 100% back up the statement of they hold up time and time again when being opened and closed. All the past childhood feelings of my pop-up books not working after the 3rd read through are gone!

With that said, I am really impressed with the durability in how many times they can open, close, and stay intact.

We’ve all been in that situation where someone goes to move their models and practically falls on the table. They bump into the terrain, shift things around, and mess up the board state. Of course, we needed to test out what happens in that scenario.

These things are really strong against wild uncoordinated hands… like shockingly strong! This terrain doesn’t budge, even if someone really pushes against it the whole mat will move and the terrain doesn’t bend. This eliminates so much hassle of resetting marker & terrain and worrying about what went were.

Along with holding up against clumsy humans they also support heavy models. I tested different types of models from lightweight Necron Warriors, a big character like Magnus the Red, and even a Forge World Flyer like the Fire Raptor on a stand! They all supported and balanced each model and some!

On top of that during the test game there was an epic melee combat scene between the C’Tan Shard of the Void Dragon and a Winged Deamon Prince. I won’t spoil who won, but the terrain held both models comfortably!

People looking for tactical play will have fun with these. They have various heights that add different elements to the game. One example is the rule of terrain over 5” is obscuring, meaning even if you model can be seen behind terrain over 5” it is obscured.

That rule actually was a factor in the test game we ran and impacted the outcome of a big shooting combo. The player on the other side knew that was a factor and so they played accordingly.

The mat itself has really cool details and looks amazing. The esthetics of the mat compliment the pop-up terrain and adds to the immersion of the game. When you look over the board, the combination of the two makes you forget that the terrain itself is made of paper!

As someone who plays and runs games regularly, I’m seriously shocked at how fast and easy these are to set up and break down. Also, because the terrain is in the boards, it makes storage for these a dream come true!

I have shelves and shelves of terrain storage so I know the struggle of storage space. I could clear all my terrain off the shelves and put boxes of the pop-up terrain board there and have enough board for several different tables! Also if (and hopefully when) they come out with various types of boards I could have 3-4 different boards stored in the place of what would normally be enough terrain for maybe 1 full table.

As much as I enjoy these, not everything is rainbows and butterflies. There are a few kinks to work out but they are straightforward to deal with.

The first and obvious one is that there is only 1 piece of terrain per mat. It’s an easy fix, just add some extra small pieces. However, if your goal is to run a full game and not worry about storing ANY extra terrain, this will be an issue.

While we’re on the subject of the single terrain pieces, let’s note that the terrain is where it is… Right in the middle of the board. For on-the-go, game store, and tournament use this isn’t a big factor. You’ll get enough of a rotation of people using it that the urge to move terrain won’t be there. But for someone on their 100th home game (which bonus durability points, I am confident you could get 100 games out of these) with the same army… They might want to switch up the terrain placement.

My overall review for the Upzone: Pop-Up Terrain System is 4/5.

It’s everything you could want for sturdy, durable, easy to set up terrain.

I highly recommend these to anyone that runs a game store, is on the go, or lives in a small space with limited storage.

I expect to see more of these pop up around the tournament scene as well. With how easy they are to set up and breakdown it’s a no-brainer for anyone running events.

If you want to learn more about these then click here and check out their Kickstarter!

If you want to see more reviews and 40k content from us check out our full blog. You can do that by clicking here!