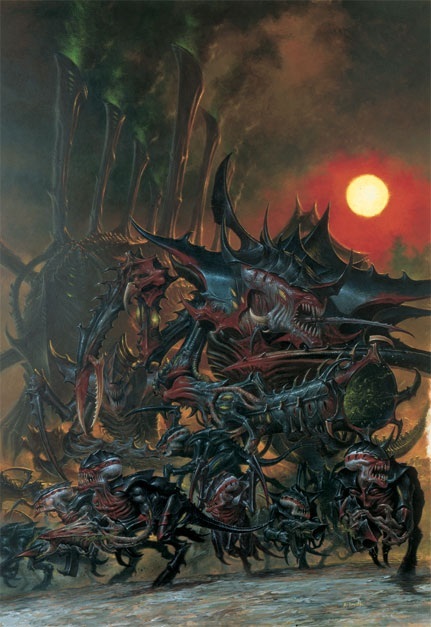 We’ve only seen a fraction of 9th edition so far but based on what we have seen it’s looking like Tyranids in 9th will have more options and more viable builds than they’ve had in a long time. Many of the Tyranid big monster kits are beautiful and it will be nice to see them on the tabletop more.

The previews from Games Workshop for 9th edition 40k have been coming along for a few weeks now and we have a decent idea of some of the big changes in the new edition. Today I’d like to talk to you all about how these changes will affect Tyranid in 9th going forward.

One of the changes coming in 9th edition is that vehicles and monsters can now shoot units that they are engaged in combat with. Currently one of the most efficient ways to shut down Tyranid shooting is to tag the big gun monsters in combat. This made certain monsters not worth taking. For example, an acid spray Tyrannofex will be an excellent midfield threat. This is because any unit that charges it will have to contend with 4d6 hits from the acid spray. Exocrines can now better defend themselves in melee with their shooting. Their Symbiotic Targeting rule offsetting the -1 penalty to shooting heavy weapons while engaged. Beware though, enemy vehicles and monsters will also receive the same benefits. The changes to how fallback works will more than make up for it though.

Tyranids in 9th: Falling back

Falling back in 9th is much more restrictive than it currently is. While wrapping/tri pointing is harder because of the Desperate Breakout stratagem, this has been balanced out by the following two changes. First, units that fall back cannot cast any psychic powers. This is big for squishy psykers (Farseers or Astropaths for example) who would usually want to leave combat to avoid dying. Now they will have to choose between casting or staying in combat. The second, and more significant, change is that units cannot shoot if they fall back, even if they fly. This hurts things such as Eldar/Dark Eldar vehicles and most Tau castles. Units like Venoms will have to choose between surviving while retaining mobility and shooting. Riptides go from hitting on 3s with markerlights to hitting on 5s with no markerlights.

There is also the added bonus of having to shoot what you are engaged with, so the Tyranid player can dictate which of their units will be targeted. This change has the potential to flip matchups that were very bad before into something that is more balanced going forward into 9th. It is important to note that this does hurt the devourer flyrant as he can only shoot what he is engaged with. He will also have to give up his psychic phase as well if he needs to retreat from combat for whatever reason.

The new blast weapons rule will present a challenge for any horde Tyranid unit. More shots equal more dead models and in isolation, this new rule appears to be very unfair. But it must be viewed in the context of the wider shooting changes and terrain definitely helps with this. The new dense cover rule (-1 to be hit with shooting while in the terrain piece) is excellent for Tyranid survivability. This also removes the need to take Venomthropes or a Malanthrope. Let’s look at some math for this. In 8th a Wyvern (4d6 S4 BS4 shots) would average 14 dice hitting with 7. If shooting at a horde unit a Wyvern will get 24 shots but the dense cover modifier will make it hit on 5s, which is only 8 hits. So the extra 10 shots aren’t such a big deal as it only translates into one extra hit.

Line of sight rules have also been changed in 9th. The New Edition:9th Terrain Rules previews several changes. This will affect you depending on whether you play rulebook 40k or ITC style games. The big change here is that terrain features taller than 5 inches will completely block line of sight to models that have fewer than 18 wounds if they are not in the terrain piece.

Most rulebook players will notice that drawing line of sight will become harder. This will allow Tyranid players to more easily hide their hard-hitting combat units as they advance up the table. ITC players will likely notice that drawing line of sight will become easier. The first floors of ruins will likely no longer block line of sight. This has implications for units such as Hive Guard. They wanted to hide behind a first-floor wall and shoot all game with little threat of retaliation.

One of the more recent previews is the changes to unit coherency. Coherency is one of the Top 5 changes to 9th Core Rules. In 9th models in units that are six or more models will have to maintain coherency with at least two other models from their unit rather than one. This should serve to reduce the footprint of large units and curtail the so-called “conga lines” of models. I see two major implications of this for Tyranids.

First is that this change will make bubble wrapping and screening far more difficult. This will help melee units get to the targets that they want to charge. Second is that it will make moving large units (think Genestealers or Gaunts) more difficult. If a unit falls out of coherency players will have to remove models until the unit is back in coherency. Tyranid players that use large units will have to be mindful of this as some sloppy movement and a few casualties may result in a large part of a squad being removed by this rule.

We’ve only seen a fraction of 9th edition so far but based on what we have seen it’s looking like Tyranids in 9th will have more options and more viable builds than they’ve had in a long time. Many of the Tyranid big monster kits are beautiful and it will be nice to see them on the tabletop more.