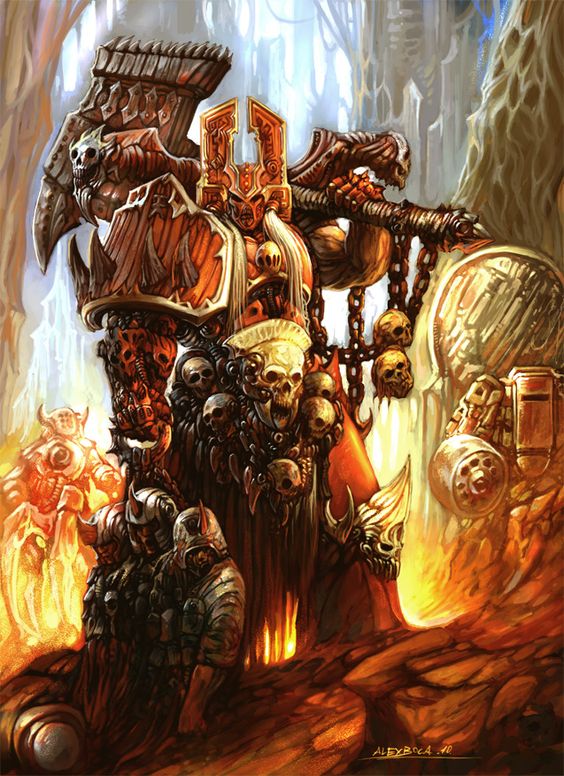 Today’s article is all about melee weapons. We all know that Warhammer 40k is a game of guns and bigger guns. Of course, bringing a knife to a gun fight is not the smartest way to go… but it’s clearly the more awesome way to kill! Throughout the universe of Warhammer, many races have created different melee weapon options. They know that when you get down to it… war is messy and some things need to be dealt with in person. No stats were taken into account for this article. Only the “cool factor”. Here is a short list — in no particular order — of the 8 most epic melee weapons of 40k.

Why 8 you ask? Because nothing is more melee than Khorne and 8 is the number of the God of Slaughter. If you want to complain, I can try to find his phone number but I don’t advise you calling him for complaints. He tends to be in a murdering mood all the time.

The famous chainsword… I had to start with that. It’s the first thing I saw when I started in venturing into the Warhammer universe. It just captures the grim darkness of the far future. Warriors using swords? Classic. Warriors using a chainsaw? Weird. Warriors using a chainsaw modeled in the fashion of a sword? EPIC!!! Maybe it’s my Flesh Tearers taste at play here but chain weapons are everywhere and it’s amazing! Orks have them, Eldars have them… maybe Tau should have some to improve at dealing with things close up.

The Crozius is meant to be a symbol as much as it is a weapon. This weapon is so powerful that just the sight of it brings enemies to their knees, asking for forgiveness. That’s how much of an impact the Crozius has on a battlefield. Even the most blessed of weapons can be turned by the powers of Chaos and the Accursed Crozius is a great example of that. The Dark Apostle walks next to their brethren with this cursed holy symbol and enemies run in fear or throw their life forfeit, knowing that there is no forgiveness in this weapon.

The menacing Power Claw. The most famous of Ork warbosses, Ghazghkull Thraka, wears an impressive one. This weapon is the best friend of an Ork warboss and is synonymous with power and conquering. Lightning Claws are nice, but a Power Claw get’s the job done like no claw ever could.

This weapon is really niche and specialized but oh so contradictory with it’s name. Since when a kiss can be harmful? Ok, yeah, I know… mononucleosis… but you get what I mean. Harlequins are so deadly that they don’t need to name their weapons with words like “Power” or “Thunder”. That’s how you prove you are not insecure about your position in the world.  It injects a rapidly spinning monomolecular wire into the target — it ignores how tough you are — and turns you into goo.

You can try and be as effective as you want with your weapon but it’s difficult to be more effective than an Imperial or Traitorous Knight. Ok maybe a Titian’s foot could be, but still… Imagine being in the fight of your life for hours and hours. And as you raise your head from the corpse of your enemy, you see that what you thought was a darkening sky via clouds is actually a giant mechanized foot coming down on you. You can never outrun it nor dodge it. Nothing will remain of you… just goo! (Come on! I had to rhyme.)

A sword is nice no matter how you slice it. We talked about chainswords being awesome for their gory usage but there is a step above that. A sword known for the clean corpse it leaves behind. Where a lot of weapons kill in bloody ways, a Force sword is a clean kill. A sword so powerful it can cut through your very essence. Not in a metaphoric way, more like a literal “it took the life of its enemy, separating the soul from the body”. We are talking about a sword that cuts into your soul and severs the connection it has with you. That’ll hurt you right in the feels!

This is a tool of war like many others. It can be just as much a weapon of healing — performing medical procedures — made to help hurt battle-brothers as it can be a melee weapon, capable of piercing the most tough of armor or thickest skin. This weapon gives you the kiss of death by the way of a powerful spring-loaded piston going right through the skull and into the brain, killing instantly. Pretty difficult to be more up close and personal than that. That’s why it’s important to always keep some mint on yourself as an Apothecary. You don’t want bad breath to be the last thing your fallen brothers remember about you.

I had to close this article out with this. What is more Warhammer than a Warhammer in the the 41st Millenium? Nothing. This is not a finesse weapon. This is not a weapon to deflect blows. This is a weapon made to charge and obliterate with a single touch. Granted, it’s not the foot of an Imperial Knight, but it turns you into a pile of whatever pretty instantly too. You want to destroy a tank while looking through the windows into the soul of helpless victims? This is for you! You want to make a pile of mush of an enemy? This is for you! It is so famous that it has been seen on the covers of many editions of Warhammer 40k Rulebooks.

This is but a short list of a LOT of melee weapons in the Warhammer 40k universe. I hope it inspired you to revisit some old models or maybe to kitbash a new Slam Captain. Do you have favorite melee weapons that didn’t make the list? Share it with us through our comment section and let us know what would be on YOUR list of best melee weapons. If you like melee combat and melee weapons, look at this advance list for a melee army: https://nightsatthegametable.com/world-eaters-tactics-advanced-play/

Want us to tell you how you can get amazing deals on 40k supplies from miniatures to paints? Click this link to book a session with one of our team members to find out more: https://nightsatthegametable.youcanbook.me

For those of you who already know how to play the game, we have a free guide. That guide teaches you how to paint professional-looking miniatures, gives advanced tournament tips from a 40k World Champion and tells you how to find more time to play and simple methods to get cheap miniatures! You can get that guide here: http://bit.ly/40k-free-guide-fb

If you’d like a breakdown of the advanced tactics and strategies for all 40k armies, painting tutorials from a Golden Demon winner, secret battle reports and tons more consider becoming a Nights at the Game Table member today. Click on this link to learn more: http://bit.ly/nights-40k-members-fb