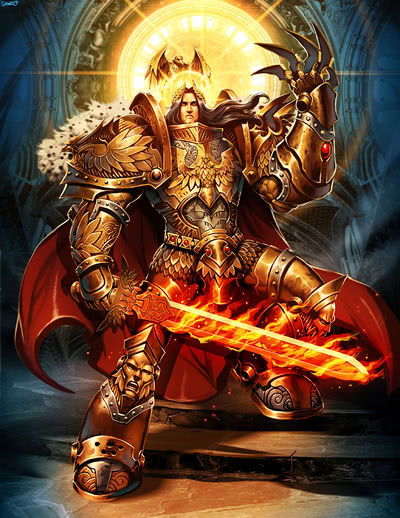 Disclaimer not all of the legendary weapons could make it to this list! I’m sure you have 1 or 2 right now in mind that you would like to see on this list. If they are not in here please let us know in the comments and share why you think it’s the coolest.

This daemon sword is a must for this article. We say “sword” but this daemon entity cannot be reduced to just a sword. A daemon in it’s own right. The Drach’nyen dates back to an age before mankind. Similar to the mount of Archaon in Warhammer Age of Sigmar, it changes shape to best fit the personality and history of it’s wearer. This legendary weapon has many names but 2 comes to mind: Shard of Madness and Echo of the First Murder. It drinks the souls of it’s victims to be forever displayed on it’s blade.

Talk about a weapon in-sync with it’s weilder. This legendary weapon perfectly reflects Trazyn the Infinite. He doesn’t like to get his hands dirty, so he’s not much of a melee guy. Good thing that weapon lets him deal with opponents from a distance. On top of that, he is a collector of unique things. The Empathic Obliterator let’s out a psionic wave from inside the body of it’s victim. Anyone within range of this attack that is on the same empathic wavelength as the victim is destroyed as well. That is a pretty badass weapon if you ask.

Maugan Ra knows how to make a weapon legendary. Firstly, a legendary weapon is any but legendary if there is no backstory for it, am I right?!

According to the legends of Maugetar, it was created during a personal quest of Maugan Ra to create something that would be amazing in combat and from a distance. To achieve this he sacrificed and exarch battled through hordes of Slaanesh Daemons, and even fought a Keeper of Secrets. All in the quest to gather the materials necessary for the creation of this extraordinary weapon with the aid of a Boneshaper. In the end, the creation of this weapon of legend was such a success that Maugan Ra crippled the Boneshaper to make sure he wouldn’t create another one.

Blood Reaver couldn’t have landed in better hands than Gabriel Seth, Chapter Master of the Flesh Tearers. Eviscerators are already pretty powerful weapons, but this one is considered even more extravagant than usual Eviscerator. Gabriel Seth is so strong that he can wield it in 2 hands but as skillfully as if he was wielding a normal chainsword. The ferocity of this weapon when it carves through it’s opponents stirs nightmares in enemies and is a symbol of the future of anyone getting in the way of it’s wielder… friend or foe.

I know I know! You were expecting the Sword of the Emperor. I may have misled you with the first picture but… nothing beats the legacy of the Talon of Horus.

A weapon that saw the Horus Heresy, killed a blood brother in a quest for power and pride, and that mortally wounded the Emperor of Mankind himself to the point that he had to be put on the Golden Throne. That is only the legacy of it BEFORE Abaddon took it and used it in The 13 Black Crusades for 10,000 years.

The Talon of Horus itself still carries with it the smell of the blood of Sanguinius. This weapon brings The Blood Angels to the brink of the Black Rage instantly when in sight of it. Psykers hear echoes of painful cries from the warp just at the mere presence of this legendary weapon. All of this from the amount of destruction and betrayal it represents. Not a lot of weapons can bring that much animosity and that’s why it ranks #1 over the infamous Sword of the Emperor.

It was really hard to choose only 5 legendary weapons. Let’s face it, I could’ve put 20 and still not have gotten through all the ones I wanted. Which one is your favorite? What do you think should have made the list? If you like lists, here is another one on our top melee weapons!

Wanna talk about deals on miniatures and paints?

Want to know how you can get amazing deals on 40k supplies from miniatures to paints? We have a dedicated team to help our followers find the best deals on miniatures, painting supplies, and anything else 40k related. Click this link to book a session with one of our team members to find out more: https://nightsatthegametable.youcanbook.me

For those of you who already know how to play the game, we have a free guide. That guide teaches you how to paint professional-looking miniatures, gives advanced tournament tips from a 40k World Champion and tells you how to find more time to play and simple methods to get cheap miniatures! You can get that guide here: http://bit.ly/40k-free-guide-fb

If you’d like a breakdown of the advanced tactics and strategies for all 40k armies, painting tutorials from a Golden Demon winner, secret battle reports and tons more consider becoming a Nights at the Game Table member today. Click on this link to learn more: http://bit.ly/nights-40k-members-fb