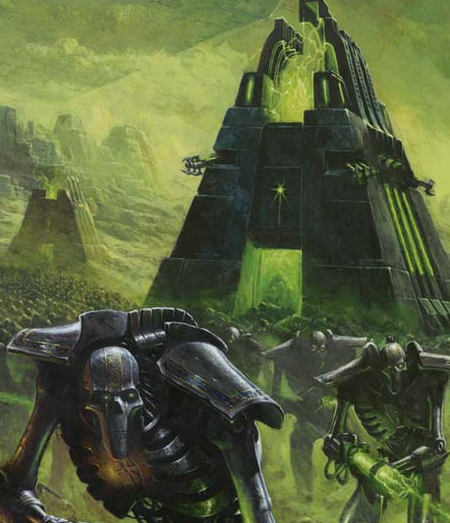 Throughout the United States at various tournaments was a player wearing a black hat and bright green lettering: “Make Necrons Great Again”. Antonio Cedeño better known as Deno ended the 2019 ITC season as the number 2 player of Necrons in Competitive 40k in the world. With 4 events this Season he now reigns as the top Necron player

This is David with Nights at the Game Table and I interviewed Deno about his thoughts on Necrons and Necron units. In part 2 of the interview, Deno will tell us how to beat the Imperium as a Necron player and their Tactics. Even Eve the Queen of the Necrons has to bow to his Tournament prowess. You can watch her and The Narrative guys while they play Narrative games Here.

Interview with Deno about Necrons

How well did you do last year?

Last year my GT record was 28-5-2. Playing for top spot a few times and taking home a 5-0 and second place at the Alamo GT.

For Necrons in Competitive 40k, what units stick out for you?

I can give you a different type of run down for Necrons.  We all know that Immortals, Imotek, and Destroyers are good. Lately, you will not see those in any of my lists and here is a little insight into my thoughts on how I like to run Necrons.

Flayed Ones – Do you like Genestealers, then how about paying more per model with less movement less stratagems and powers to interact with them. The only HQ in the Codex is in a dynasty that doesn’t buff them.

Praetorians – Sweet looking models with great fluff.  The problem, no dynastic code makes them unable to be buffed except for a few HQ units that also do not have a code or using Imotek.

Doomsday Ark – Str 10 cannon with AP-5 can eat heavy armor, but with D6 shots and D6 damage, the randomness of this gun can range from 1-36 damage.  Think about placing in Nihilakh Dynasty for reroll 1s if it remains stationary or team up with a Triarch Stalker.

Doom Scythe – The reason this model is in almost every list is because of the Amalgamated Targeting Data stratagem which is 1CP and can toss out 3d3 mortal wounds per unit hit. Anyone who isn’t Necrons hates this ability, but let’s take an objective look at this stratagem.

“that’s a statement of how bad you have deployed”

The requirements for this ability are three aircraft for a total of 450 points. All three needing line of sight of the point. One within six inches of the other two and if one is lost the stratagem doesn’t work.  Then the Necron player needs the correct target with multiple units within three inches of the point on the battlefield.

If you have lost several units to this stratagem that’s a statement of how bad you have deployed and not a testament to how powerful this ability is.

Tesseract Ark – This model is T7 (which is a big deal since Necron tanks are generally T6) with a 3+/5++ and still has Quantum Shielding.  With 2 different payloads to fire and one of them has 3 different firing profiles this tank is starting to be in more lists because of its durability and its Swiss army knife mechanics to handle multiple threats.

Stalker – Not yet a staple in all list it is a nice tool to think about since its Target Relay ability gives reroll ones to hit for Necron units.  This is one of two ways to get this ability for Necrons

Annihilation Barge – This choice is controversial amongst the Necron community with most not agreeing with me.  This little eight wound tank is normally low on enemy priority, but shouldn’t be. In this Marine meta running this tank in Mephrit (AP +1 when in ½ range) and full tesla getting extra hits on 6s and forcing a 4+ has been my secret sauce of getting rid of intercessors and getting those recon or behind enemy line points.

Deceiver – Still priced way to high when compared to a Demon Prince or the fact that there are stratagems that do a version of his ability, this guy is still a great asset for Necrons.  Grand Illusion can be used to redeploy D3 units into a better line of sight angles or to pull back Tesseract Ark you deploy aggressively. Or even sneak Anrakyr the Traveler up the board to get in range of his ability.

Where will you play Necrons in this Competitive 40k ITC Season?

This season I look to be hitting all of the Texas Championships to include trying to win my 1st Bowie knife at the Alamo. I’m also looking at going to more Midwest events in Kansas and Oklahoma. Then finish the year off at Warzone Atlanta.

What do you hope to see for Necrons in Psychic Awakening?

I would love for Necrons to get the psychic nulls back with the Pariahs. They were removed from the game in 5th edition and didn’t see much play in editions before that because of not having the “Necron”   Which meant they weren’t part of the phase-out total.

Make Spyders worth taking to take advantage of Gloom prisms.

Make Necron troops immune to smite. Fluff reason for me is smiting sounds like something that affects a soul. Necrons gave up their souls.

It would be cool to have items in the Necron force that have Blackstone elements. This would make for an interesting dynamic to reduce or amplify the opponent’s powers.  To not stop a power but reduce them in a way or to amplify it but the Psyker perils with double damage. Something to interact in that phase would be fun.

So you want a new codex?
It’s what we need.

Join us for part 2 where Deno talks about how to beat the Imperium as Necrons in Competitive 40k. The Imperium has continued its hold on the Tournament Scene with the Grey Knight Surprise at Barrie Bash

New to Warhammer 40k? This is how you get a free army list designed for you!

If you’d like the Nights Team to give you a free Army List designed for you free of charge click this link to schedule a time with one of our team members: https://nightsarmybuilder.youcanbook.me

To talk to the Nights at the Game Table team and discuss this article and everything Warhammer with them join Game Talk For Gamers https://www.facebook.com/groups/GameTalkForGamers.

For Those who already know how to play Warhammer 40k and you’d like a free guide that teaches you how to paint professional-looking miniatures, advanced tournament tips from a 40k World Champion, how to find more time to play, and simple methods to get cheap miniatures go here: http://bit.ly/40k-free-guide-fb

Edit an earlier version of this article stated that Deno was number one in ITC. That Title belongs to Eulis Sanders