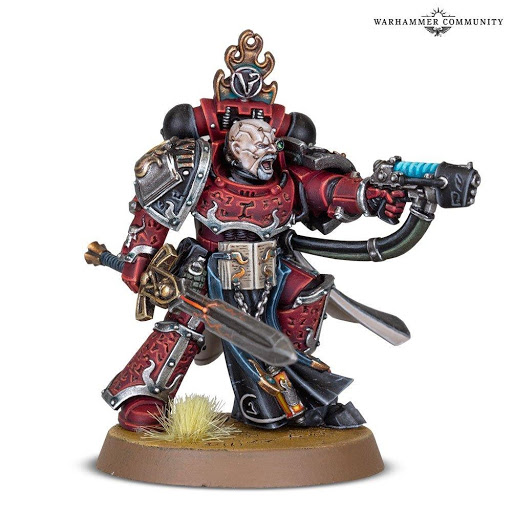 Here it is! The second Warhammer 40k preview comes directly from GW. For the people that don’t know: in all this pandemic that is happening around the world Adepticon had to be canceled! Games Workshop, instead of just shutting down the announcements that were planned for that event, decided to shift their focus on special previews on Saturday mornings for a stretch of weeks.

Here we are gonna look at all the announcements that happened yesterday, Saturday the 4th of April.

First, we have to look at the models and I know you love 40K so here is the Warhammer 40k preview:

Look at these 2 new Praetors directly from the Forgeworld studio. Of course, as you can see they bear the symbols of the Word Bearer legions so all the fans of the Sons of Lorgar out there can rejoice. Of course, nothing is keeping you from using them as sorcerers, dark apostle or captains in terminator armor and power armor in your 40K legion.

We can’t wait to see what you guys can do with those kits. Games Workshop also hinted in their Twitch video live that there are going to be new named characters revealed soon.

The psychic awakening continues with the 9th book titled: Pariah! These two characters are going to be released tied to that and everybody knows that the term Pariah is tied to exclusion but also as anathema beings to psychic users.

To give a quick rundown of these 2: the lady is called Ephrael Stern and she is a chaos destroying weapon of war from the Sisters of Battle. She is the main character of the graphic novel named Daemonifuge. The Graphic Novel will see a full-colored re-release for her 20-year anniversary special edition. She is accompanied by her harlequin partner, the mysterious, Kyganil.

Lord of the Rings Miniatures!

Following all of these Warhammer 40K preview and the grim darkness of the far future, many other games got to see beautiful things coming. Here is a quick rundown for all of you that don’t only have space for one universe in their heart:

New models for the Rangers of Ithilien (awesome models for human rangers in D&D) coming soon! Also, a new campaign book following the epic story of the Ringbearer and all of its challenges.

Bloodbowl gets a new plastic Treelord for the Halfling and Wood-elves team (great again for a D&D creature).

Age of Sigmar gets 2 big previews:

The Lumineth fans get access to an army box following the same kind of pattern as the Sisters of Battle. This box contains fully customizable kits that let you build 10 Auralan Wardens and 5 Vanari Dawnriders, plus The Light of Eltharion. You also get tokens, dice, and everything to start your army in 1 box. The Sons of Behemat also make an appearance.

This army, of only Giants, has been long-rumored and is now peaking out of the forest! We will have more on that soon!

Last but not least, GW announced that until the end of April, for every 100$ you buy in vouchers from their website and from Forgeworld, you get 10$ bonus for when the store reopens.

I hope you loved this small (size doesn’t matter when it’s made with love right?!) rundown of the key elements that came out on their last preview. We want to hear you on what excites you in all this and share with us your opinions below in the comments!

Want to talk to the Nights at the Game Table team and discuss this article and everything Warhammer? Join Game Talk For Gamers! It’s free!

Don’t know what Warhammer 40k is and how to play it? Check out the video that we made here just for you: https://youtu.be/mxLZ2GqN4R0

Already know how to play the game? Want a free guide that teaches you how to paint professional-looking miniatures, advanced tournament tips from a 40k World Champion, how to find more time to play, and simple methods to get cheap miniatures go here: http://bit.ly/40k-free-guide-fb

Need a breakdown of the advanced tactics and strategies for all 40k armies, painting tutorials from a Golden Demon winner, secret battle reports and tons more consider becoming a Nights at the Game Table Member today. Click on this link to learn more: http://bit.ly/nights-40k-members-fb