This week’s Rumor Engine needs no further guessing. At first glance, we can easily tell what is it, or can we?

Here’s a closer look at Games Workshop’s sneak peak for the week. 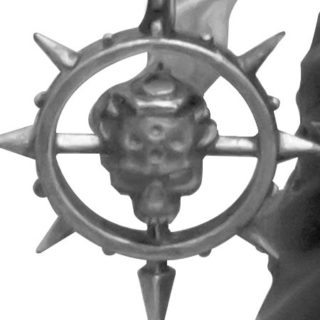 Apparently, the close thing that we could easily associate this object with is the Chaos icon, because the metal frame looks exactly like their symbol. Taking into consideration that there are rumors floating around about Fulgrim or Angron showing up around December, we can say that there’s a high chance that our guess isn’t so far-fetched after all.

While the symbol being flaunted in that object in the picture doesn’t necessarily provide a direct description to the creatures mentions, it could be part of their symbol or decoration. We could be looking at Daemon Prince or Primarch’s piece of jewelry, which is similar to this model.

If there’s a creature that is most likely to display some burning skulls in their fortress, it’s the Chaos Gods. However, until we get more clues or hints to back-up our almost accurate guess, we couldn’t really tell whether it’s them or not.

So what do you think could be the thing in this week’s Rumor Engine? There are no wrong answers for now since we don’t really have a full preview of it. Let us know what you think!