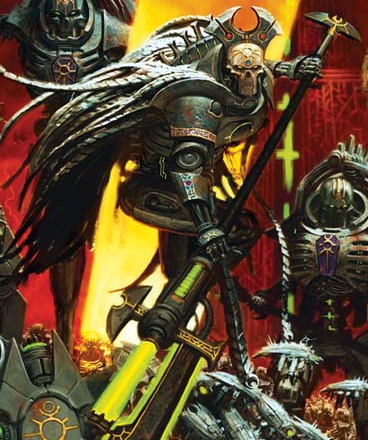 Deno, how do you beat the Imperium as a Necron player?

The best tactic Necron has against the Imperium is to own the deployment stage of the game. With abilities like Grand Illusion, Amalgamated Targeting Data and the range of Doomsday Arks Necrons can bully the board during this phase. Once you start making the enemy have to change their deployment patterns you have the advantage, but you have to know how to capitalize on the advantage.

If you are going first know what is really going to hurt you. Those D6 damage weapons might be a good target but with most of my list having Quantum Shielding these platforms are at a lower priority. Generally, it’s a good idea to start removing the troops that are going to hold objectives or anything that has high AP and low damage (like plasma or thunder fire cannons) because these weapons will hurt the standard T6 4+ tanks and give no chance for QS to work.

What Tactics would you use if you have to go second?

Going second what are we to do? Well, that first volley from Imperial Fist and Iron Hands is still going to hurt, but they have to move onto the next doctrine step. Start making a game plan as your opponent sets up during their deployment. Figure out what you think you are going to lose, take a moment before you begin your turn and see the status of the board. Ask yourself the following questions: Can you hold more this turn? Did your opponents shooting kind of whiff? What are the units that benefit from Marines going into tactical doctrine? Do I still need this C’tan or will he benefit me more going right into the lines and blowing up on a 4+? Should the Doomsday Arks get into rapid-fire range to clear this objective?

Capitalize on the status of the field and what’s going to happen next. Remove the units that are the biggest threat. Set up your sacrificial units. These are things you have to think about and find your points because it’s a dice game and you never know, that opponent’s turn 2 could fall flat and you’ll be in a position to take the game from them.

Do you like the changes to Imperium Melta weapons?

The Melta gun change in the Sisters of Battle and Space Marine book was a straight slap in the face against Necron Quantum Shielding. That is the only reason to go from “take the highest” to “pick a dice”.

Honestly, the new Melta rule is fine since so many people think Quantum Shielding is overpowered. This now gives Imperium players yet another good tool to take out Necron heavy armor. For some reason, most of the mouthbreathers who play Imperium factions keep shooting Lascannons at Doomsday Arcs and get sour that we reflect their 5 & 6 damage rolls. (He is referring to the author as our last game with my 14 Lascannons list I never rolled so well and so pointlessly high on damage before)

How difficult do you find it to beat the Imperium as a Necron player?

My easiest Matchups are Sisters of Battle, Imperial Guard and so far in our local meta Grey Knights.

It could go either way against Space Marines. The Thunderfire Cannons worry me in the Devastator Doctrine. Imperial Fist getting the ignore cover and bonus damage are the worse. That 1st round of shooting is rough as it’s a 6+ save followed by the need for a 1 on the Quantum Shielding roll. They have 2 or 3 Cannons getting 4d3 shots.

The hardest to beat Imperium armies are the Blood Angels and Imperial Knights. Against Blood Angels was when I was playing Sautekh with a lot of Tesla I got the extra procs on the Tesla weapon but the Sagiunary guard units would just brush those wounds off. Now I’m Mephrit. The Death Company troops get right in my face. I have not seen a lot of Blood Angels in the last couple of months but I think with the new Space Marine errata that might change.

“Everyone has an Achilles heel”

Everyone has an Achilles heel they can’t seem to overcome. Blood Angel Smash Captains tend to be mine for some weird reason. I know most Necron players are screening them out. The Quantum Shielding rolls are not there for me when I get hit with Thunder Hammers.

Imperial Knights are hard because of the randomness of the Necron high power weapons.

Last week there was an Imperium GT winner of mixed Sisters, Guard, and Grey Knights but those 3 are your easiest?

Versus Sisters of Battle depending on the deployment map, I have been able to remove anywhere between 7 to 12 units my opening Salvo. This is because the High Armor Penetration and strength of my guns is the remedy to any of their big guns. I have been rocking high strength Tesla because of our local meta. This causes my weapons to wound on twos against the troops of the sisters. Even with some of them ignoring AP 1 or 2 or whatever they have it’s still a lot of saves to make.

It’s the same versus Imperial Guard.

“I was surprised the 1st time I played Grey Knights”

Grey Knights have a lot of firepower and a lot of smites. I tend to just feed them a flyer or a Ghost Ark depending on my list. Smites can be worked around because they have to hit the closest visible target.

I was surprised the 1st time I played Grey Knights and was also experimenting with Lychguard. The matchup didn’t go my way. But playing heavy vehicle builds and having AP-1 or 2 on my anti-infantry weapons when I’m using Mephrit. Grey Knights tend to just get melted down.

I am able to ignore the paladin unit until I’m ready to interact with them. They have solid shooting but slow movement so I normally can avoid Close Combat with them.

Dark Angels, Space Wolves and Deathwatch or do you lump those into the 50/50 of space marines?

Dark Angels and Deathwatch lack good players in the greater San Antonio area to even give me a challenging game. I imagine playing against them is the same tactics: Kill the big things, remove anything that is Dam 2 or Dam D3 1st and drown them in saves from tesla.

Space Wolves? I haven’t had an issue yet with this force. They are my terrible codex brother at this point.

And the rest, how do you beat the Imperium when its Adeptus Custodes, Sisters of Silence.

Sister of silence- is this even a thing?

Ad Mech? Man, if Necrons got the support that this line gets we would be unstoppable. I haven’t played enough games against this force to understand what they do. I only played them twice since coming back to the game in 8th edition.

Custodes – Screw these guys. These games are so swingy. Either I just delete them or everything bounces or them and I lose the objective game.

Competitive 40k has been dominated lately by the Imperium as reviewed in Last weeks Meta Report. For those who prefer the more casual side of Necrons in 40k, Join Eve as she continues the Necron fight against Adam’s Imperium with the Narrative Guys in Episode 2.

If you’d like the Nights Team to give you a free Army List designed for you free of charge click this link to schedule a time with one of our team members: https://nightsarmybuilder.youcanbook.me/

To talk to the Nights at the Game Table team and discuss this Battle Report with them join Game Talk For Gamers. https://www.facebook.com/groups/GameTalkForGamers