This Warhammer 40k Space Wolves Tactics article is all about the new Wulfen. Game Workshop announced the pre-order for the codex supplement for Space Wolves. This means this is an excellent time to look at the updates to a classic Space Wolf unit, the Wulfen.  Wulfen are an iconic unit which invokes the feral nature and ferocity of the entire Space Wolf chapter.

If you want some cool Space Wolves Lore then click here and check out our 25 facts about Space Wolves!

Wulfen are a fast, strong unit which are above average in melee combat.  They gained 1” extra on their movement and also went up to toughness 5.  Wulfen maintains their Death Frenzy rule.  This no longer gives them a 5+++ damage ignore ability (feel no pain).  Instead, the ability allows them to fight on death if they have not already done so in the phase.  The unit gained an ability Savage Fury which means they always count as being in Assault Doctrine and always benefit from Shock Assault.

Wulfen also lose out by lacking the PRIMARIS keyword meaning they can no longer be buffed by the Transhuman Physiology stratagem.  The unit is also lacking the Core keyword which limits their access to some auras and buffs.  Most significantly, they lose the Bounding Lope rule which previously allowed them to advance and still charge.

All in all this unit feels like it lost much more than it gained.  The staple wargear of the unit was balanced for a broader number of units which could take it.  This significantly lowered the offensive potential for the Wulfen.  Their loss of advance and charge makes the unit slower despite the increase to its base movement stat.  Losing the damage ignore component of Death Frenzy makes this unit even more fragile.  Certainly, the old way of running a unit or two with thunder hammers and storm shields and sending them charging across the board at the enemy is gone.

Warhammer 40k Space Wolves Tactics: Are Wulfen Worth It?

The base stats of strength and toughness 5 and a move of 8” means the Wulfen with basic claws might have a place as a dedicated horde clearing unit.  Thanks to always counting as being in assault doctrine and gaining shock assault, they can put out a large number of decent AP, damage 1 attacks.  This can easily wipe out a squad of guardsmen and put a sizable dent in a 30 strong unit of Ork Boyz.  The question to ask is if this is something that Space Wolves still need given their border access to the basic Codex Space Marine units.  Ultimately that will be a choice for each player to make for themselves.

How To Get More Tactics From Us!

You’re invited to join our group on Facebook Game Talk for Gamers so you can join in on all the discussions about upcoming 40k releases, events, and changes. Click here to join now!

Uncategorized jordangwyther - July 26, 2021
0
This is the unbelievable Lone Star Open Winning List for the Warhammer 40k tournament this weekend! Below you will find the complete... 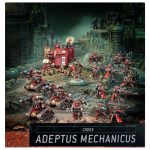 40k The Nights Team - May 24, 2021
0
Forge Worlds  Forge Worlds are what truly make this book tick and give them that incredible flavour that each...