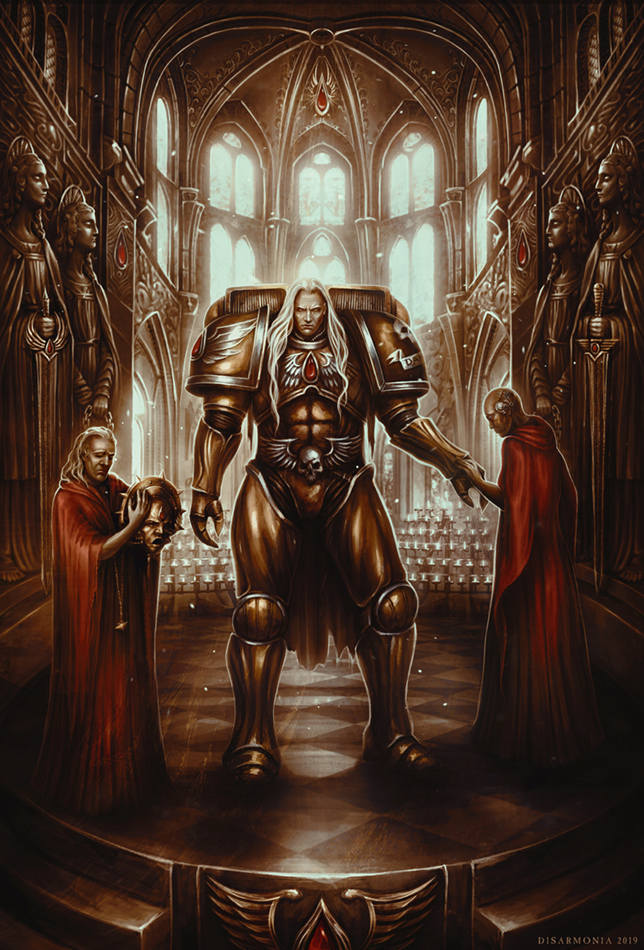 In this article we’re going to give you 25 facts about Blood Angels that you may not have known! And be sure to check out our celebratory article of the new Space Marine Codex titled 25 Space Marine Facts You Didn’t Know

The oldest living Loyalist Space Marine is Dante, Chapter Master of the Blood Angels. He has been alive for approximately 1,547 Terran years.

The Blood Angels Primarch, Sanguinius, was known as the most loyal of all the Primarchs. Horus, despite being extremely close to Sanguinius, plotted to kill him because he knew that Sanguinius would never turn to Chaos.

The Blood Angels were coined the name “Eaters of the Dead” because they were known to eat the dead corpses of their enemies after battle.

The Blood Angels “Red Thirst” is not because they need to drink blood for nutritional value. Something in their gene-seed gives them anti-aging properties and hyper focus, after they consume blood.

Dante, the Chapter Master of the Blood Angels refused to drink blood and felt the effects of aging. It wasn’t until Baal was attacked by Tyranids that Dante realized in his old age, he needed the boost from drinking blood to lead his army to victory.

“Karash” is the mixture of wine and blood that Blood Angels drink regularly if they do not have access to prisoners, or enemies on the battlefield. The blood for these mixtures are typically supplied by their chapter surfs.

Blood Angels have a taste for the fine arts as they use painting and art to quell the “Red Thirst” and “Black Rage” within them.

The “Black Rage” is incurable. It’s a genetic flaw that overcomes the Blood Angel and drives him mad. It’s the experiences of Sanguinius’s own rage in life. Even when the final remains of a fallen Blood Angel are combined with the Dreadnought, that Dreadnought has the “Black Rage.”

Sanguinius, the Blood Angels Primarch, got his first taste of the “Black Rage” when he was one standard year old while killing a band of mutants in the desert of Baal.

The Blood Angels took in a massive amount of Primaris Space Marines after their epic battle with the Leviathan and Tyranid onslaught.

Recruits for the Blood Angels must undergo a harsh process to absorb the gene-seed of Sanguinius that requires them to stay in a coma for one full Terran year while intravenously receiving nutrients and the blood of their Primarch.

The Sons of Sanguinius, a Blood Angel Successor Chapter, prefers to utilize bikes and jump packs over heavy weaponry and psychers. They believe all forms of psychic powers to be chaos and will kill anyone among them for using them.

Blood Angels do not have Apothecaries. Instead they have Sanguinary Priests that specialize in the Sanguinius gene-seed and keep their brothers from falling into the “Black Rage.”

Sanguinius was revered by many to be the greatest general amongst the Primarchs. He once bested a Craftworld Army with only a third of his Legion.

In order to avoid the extermination of the Blood Angels from Imperial Records. Sanguinius did everything he could to hide the secret of his genome weakness and need for blood and fierce rage. In the post Horus Heresy Era it is an “open-secret” that is accepted.

Victims of the “Black Rage” are often killed or locked away in the Tower of Amareo, which is named after an ancient Chapter Master of the Blood Angels.

Many consider Mephiston, Chief Librarian of the Blood Angels to be the most powerful psyker alive. After the Emperor of Mankind, of course.

If you were to visit Angel’s Fall, the primary settlement of one of the moon’s of Baal, you would see a great statue of Sanguinius looking down at fresh recruits, battling for a chance to join the ranks of the Blood Angels.

Despite the Blood Angels’ amazing skills and abilities they carry into battle with their controlled blood lust. Without their Primarch to guide them, the legion is dwindling as more of them succumb to the “Black Rage.”

The Blood Angels Chapter Master Dante believes he is the prophesized “Golden Warrior,” destined to stand between the Emperor and death. It is this belief that keeps Dante alive as he grow more and more weary of the life he has lived.

The elite 1st company of Blood Angels are known as “The Arch-Angels.” They are primarily built around hard hitting, Thunder Hammer wielding Terminator Squads.

The founder of the Sanguinary Guard, Azkaellon, was so loyal to the Primarch Sanguinius he stated that he would sacrifice the lives of all his men to protect him. Which made it extremely difficult for him when Sanguinius ordered him to remain on Terra and not accompany him to his destined final battle with Horus.

It is only the Blood Angels’ Sanguinary Guard that wear the angel winged jump packs, designed to honor the wings of their Primarch Sanguinius.

Mephiston’s name is believed to be inspired by Mephistopheles. A demonic villain from the German folklore story “Doctor Faustus”

The Last of 25 Facts About Blood Angels

When looking at the Games Workshop miniature of Sanguinius, you may notice he looks very similar to a famous painting of St. Michael the Arch-Angel defeating Satan. Some believe he is the grim-dark allegory to the Angelic General.

This guide shows how to:

If you’d like the Nights Team to give you a free Army List designed for you free of charge. Click this link to schedule a time with one of our team members: https://nightsatthegametable.youcanbook.me