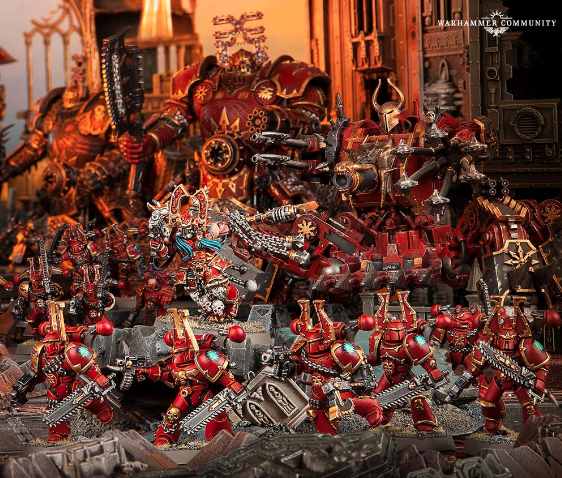 Who Are The World Eaters?

The World Eaters one of the original Space Marine legions that turned traitor during the Horus Heresy. Moreover, they are an army of rabid berzerkers that serve as the chosen legion of Khorn. Where other Chaos Marines might rely on tricks, sorcery, or “Tactics”, the World eaters instead rush headlong on to the foe. This is because their patron god Khorn cares not from where the blood flows, only that it does. Also, they really like collecting skulls for Khorn, and it’s not like they can order them on E-bay. Either way, they are some of the most insane and fearsome combatants in the 42nd Millenium.

Also, they are probably the angriest people in the entire cannon. For example, try and imagine a toddler throwing a huge temper tantrum that’s going around hitting people. Admittedly, that image is kind of funny since a toddler won’t do much damage. Now imagine that same toddler except he’s 8ft tall, 800lbs, and has an ax. Suddenly, it’s not so funny and the people he hits explode into a meat mist. However, this isn’t entirely due to the World Eaters lacking a healthy outlet for their emotions. They also happen to have a bunch of crazy Archeotech jabbed into their brains that heighten aggression. Which leads us to our next topic.

That last part actually factors into their Legion Trait, which gives them an extra +1 attack on the charge. Additionally, while everything in the army is locked into taking the mark of Khorn, you also get to take Khorn Berserkers as troop choices. As I’m sure you can guess they favor Melee combat and with the new update from Faith ad Fury they are one of the best factions at it.

For starters, berzerkers are absolute blenders that combine a high volume of attacks with a solid weapon skill and a high strength. Also, by making them troops choices they gain the ability o not only kill infantry standing near an objective but wrestle away control of it as well. With the tradeoff being that you lose out on Psykers and the other chaos marks. However, you chose to play World eaters to rip and tear, not use a bunch of convoluted nonsense and trickery.

First off, I should mention that this an army that is great for beginners for two reasons. The first reason is that it will teach you the importance of movement, pile-in moves and consolidating properly. As a melee army, you will need to learn how to do this, and as a bonus, it will make you better with any other army you might decide to pay later on.

The second reason is that it doesn’t require you to keep track of a whole bunch of wacky synergies and wombo combos like other armies would. As a result, this allows you to focus on running the army and minimize mistakes and forget special rules. So, having said all this let’s jump into the actual components of the army.

The Core of the Army

So, first up will be our Bezerkers, Dark Apostle, and Exalted champion. The Dark Apostle is in the army for his powerful prayer ability that allows nearby units to re-roll hit rolls. However, he also brings along a relic that we can use once a game to give nearby units an extra attack and posses a warlord trait that allows us to add 1 to our charge rolls. Those things by themselves will boost both our ability to fight and help us make it into melee. After all that 1” can be the difference between winning a game or losing it. Meanwhile, our exalted champion has an incredibly important job of letting nearby units re-roll wound rolls. In essence, these things combined allow our berzerkers to re-roll hit rolls and wound rolls, which will allow them to take on tougher targets.

Additionally, we are going to put all of them into Rhinos so we can get them up the board quickly. Also, it gives them a considerable boost to their survivability by adding another layer of protection for our ‘Zerkers. The Rhinos also pull double duty as chump chargers. To clarify, we can choose to charge with our Rhinos first to soak up overwatch so that our Bezerkers can safely charge on behind them. Lastly, we have a unit of cheap cultists to hold a backfield objective.

Next, is going to be our Butcher Bomb, which is going to be our big scary hammer unit. To start we are taking a 10 man unit of terminators and give them all powerfists and chainfists. Then, what we are going to do is spend 2CP for the Red Butchers stratagem to boost them further. This gives them +1 strength and the “Blood for the Blood God” Rule allowing them to fight twice. To elaborate, this squad of terminators will have 72 attacks at strength 10.

It’s also worth mentioning that we can boost it to 103 if we spend 3CP to fight a third time. If they happen to be near our characters and benefiting from all their buffs we can get that up a total of 133 attacks rerolling hits and wounds. Lastly, you can throw in Veterans of the Long War, and do enough wounds to kill 7 whole imperial knights (about 89 damage 2 wounds), or nearly TWO WARLORD TITANS (72 damage 2 wounds). There is a reason you can only use the Red Butchers stratagem once. So enjoy killing anything in the game with you turbo murder Terminators.

Well, that will wrap up our World Eaters tactics article for today. This army is absolutely nuts and as I’ve shown above, the terminator squad has the potential to kill anything in the game. Also, now that you’re here, why not check out another article about World Eaters, or one about Chaos Terminators?

If you want to talk to the Nights at the Game Table team and discuss this article and everything Warhammer with them join Game Talk For Gamers.

Don’t know what Warhammer 40k is and how to play it? Check out the video that we made here just for you.

If you already know how to play the game and you’d like a free guide that teaches you how to paint professional-looking miniatures, advanced tournament tips from a 40k World Champion, how to find more time to play, and simple methods to get cheap miniatures go here.

If you’d like a breakdown of the advanced tactics and strategies for all 40k armies, painting tutorials from a Golden Demon winner, secret battle reports and tons more consider becoming a Nights at the Game Table Member today. Click on this link to learn more,