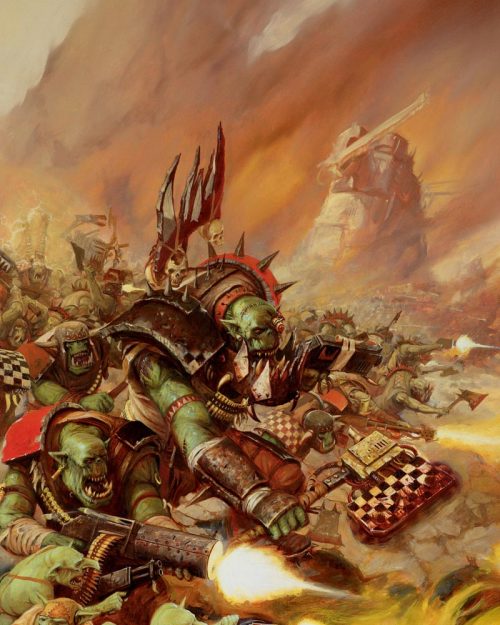 Orks just got brand new rules from the new Psychic Awakening book, “Saga of the Beast” and we are going to break down all the new information and tactics for you! We will talk about all the new subkultures, stratagems and shiny gubbins in the new book!

You can now choose for a detachment to contain a specialist mob and if you choose to do so certain units in the detachment will relace their <Clan>  keyword with the keyword of that specialist mob. For example, if you choose to give a detachment a Feral Orks subkulture then your Warboss would replace all the <Clan> keywords on his datasheet with <Feral Orks>, including any aura or buff abilities he might have. Also, you cant double down on subcultures in a single detachment. This is one of the Coolest new rules for Orks.

Also, it is worth noting that a few of these will apply to a “Mob” unit even if they operate independently after set up. Which makes the ones you can use on Speed Mobs and Dread Mobs, particularly good. Some of the Orks new gear and gubbins is definitely worth taking.

So, this might be the biggest thing that’s come out of the new book. Also, I mean this both literally and figuratively. Ghazghkull’s new model is truly massive and his updated rules reflect his new stature. As such, he now has 12 wounds and a degrading profile along with toughness seven a  2+ save. The downside is that he now has the monster keyword. However, he still gets his old 4++ save and CANT LOSE MORE THAN 4 WOUNDS A PHASE!

That last part is absolutely insane! As it means that if you are not trying to shoot him with psychic powers or fight him in melee it would take 3 whole turns to kill him. Also, remember that your opponent can’t shoot what they can’t see, so have him hide behind a Gorkanaut.

Additionally, his offensive power has seen a boost with his melee weapon! His Klaws are now Strenght x2 AP-4 and a flat damage 4. Meanwhile, he boasts a base strength of 7 so he will be wounding everything in the game on 3+. Another interesting thing is that as his profile degrades his attacks increase up to a total of 7. Also, his ranged weapon is nothing to sneer at, becoming what is essentially a 12 shot heavy bolter. Also, he can now also be included in any Ork detachment without them losing their clan Kulture. As Icing on the cake, he lets nearby Goff units re-roll hit rolls of a 1 in melee.

Well, that’s all we have for today, but there is a lot more coming! Orks have a ton of options right now and are going to be an absolute blast to play. Also, tomorrow we will have a beginner’s tactics guide with an army list to help you get your “WAAAAAGH!” on! So be sure to check back with us and since your here why not check out our Grot Tactics Article or a Battle report featuring Orks?

If you want to talk to the Nights at the Game Table team and discuss this article and everything Warhammer with them join Game Talk For Gamers.

Don’t know what Warhammer 40k is and how to play it? Check out the video that we made here just for you.

If you already know how to play the game and you’d like a free guide that teaches you how to paint professional-looking miniatures, advanced tournament tips from a 40k World Champion, how to find more time to play, and simple methods to get cheap miniatures go here.

If you’d like a breakdown of the advanced tactics and strategies for all 40k armies, painting tutorials from a Golden Demon winner, secret battle reports and tons more consider becoming a Nights at the Game Table Member today. Click on this link to learn more.