These steadfast warriors are well-known for their incredible skill in slaughtering Orks, and here’s what we know so far about their newest abilities!

Due to years of fighting against the sheer numbers of Orks, the Crimson Fists are completely at home fighting while they are totally outnumbered. As long as an enemy unit contains twice as many units as the Fists, they add 1 for all hit rolls made while attacking. As the old saying goes, for the Crimson Fists, being surrounded just means they’re in a target-rich environment.

Continuing with the trend of the Crimson Fists fighting especially well when outnumbered, Tenacious Opponent ensures that any Warlord will hit harder than ever when surrounded by a swarm of opponents.

The Space Marines, by their very nature, are tough as nails, and the Crimson Fists are certainly no exception. With Refuse To Die, a 4+ save will revive them from the dead and allow them to keep fighting just a little bit longer.

Defenders Of Humanity is a classic ability that makes it much easier to retain control of an objective. With the Warlord Trait Stoic Defender, not only do several friendly units gain Defenders of Humanity, but any units already equipped with it effectively double their ability to control objective markers. In games where objectives are the most popular win condition, Stoic Defender can be a massive advantage,

When it comes to beating the green-skinned menace into submission, there is nobody more well-suited to the job than the battle-hardened troops of the Crimson Fists. As one of their two unique Stratagems, A Hated Foe allows a unit to re-roll wound rolls when targeting Orks. This can be especially useful for taking down especially hardy Ork troops, with their notorious durability likely to be tested to the limit under the fire of the Crimson Fists.

The Fist’s other unique stratagem, Slay The Tyrant, improves their ability to hit an opponent’s character, which is ideal for making sure that you can bring your most powerful enemies down before than can wreak havoc on the Marines.

Finally, Bolter Drill allows for another hit roll by an infantry unit upon rolling a 6+, which is always a solid way to deal a little extra damage when it’s needed most, as well as provide a bit more value on a given infantry unit. 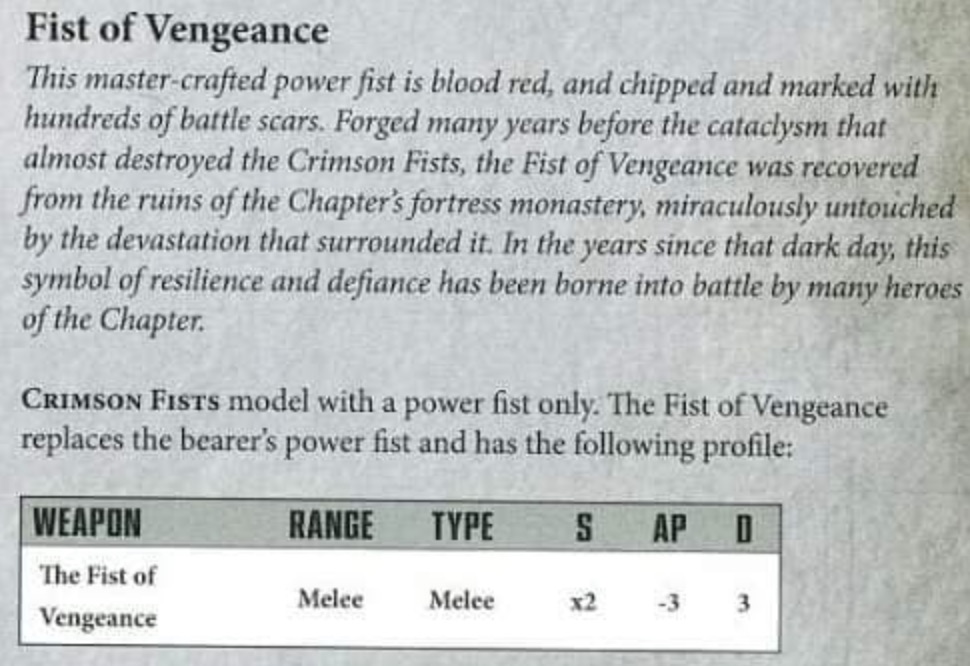 For their Chapter’s relics, the Fists have been given the Duty’s Burden and the aptly-named Fist of Vengeance, a powerful Bolt Rifle and Power Fist which can provide a significant boost for any unit.