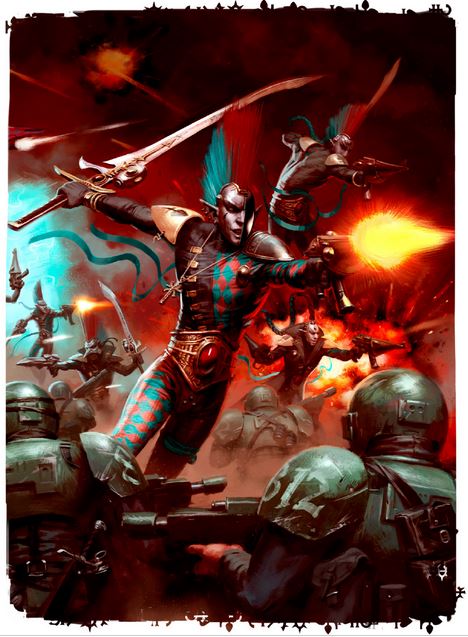 Lace up your comically-oversized shoes, put 30 of your friends into a tiny car, and grab your copy of IT; the clowns are coming!

Just a few days ago, the official Codex for the horrifyingly hilarious Harlequin army was released, featuring a variety of bizarre powers that should delight fans everywhere! Today, we’ve got an overview of some of this clown troupe’s more stand-out elements, especially the ones you might be facing the next time you come up against them!

Even with an Index, Harlequins had been doing ok, even in the toughest environments just with their index, thanks in part to their ability to compliment already powerful Craftworld and Ynnari lists. The Harlequins have certainly improved and gotten some mean new tricks in their codex. While they will still most often be a complimentary element to a Drukhari or Craftworld based list, they are worth paying attention to.

Across the Codex, most units received a points drop to some degree, with a few, like the Death Jester and Skyweavers getting a massive reduction. The list of options within the army is extremely small and while they have elements that can focus on combat or range, they’re primarily a close in fighter force based on extreme speed over durability.

To lead the force, Harlequin players can choose between Troupe Masters and Shadowseers. Troupe Masters, who are combat based and quite punchy on their own also buff the combat of units nearby in combat, allowing them to re-roll failed wound rolls, which is extremely valuable for base Strength 3 combat units. The Shadowseer is the psyker in the army, with access to a mix of offensive powers to deal damage and buff/debuff powers to add durability to the army. They also have an ability which forces opponents to subtract 1 from wound rolls when targeting nearby Harlequin Infantry units.

The only Troop option in the army, is the Troupe. Unit sizes are relatively small (5-12) but each model boasts 4 Attacks base and can take special pistols and combat weapons. Pistol options include the infamous Fusion pistol – 6” S8 D6 Damage. Meanwhile their combat options largely provide boosts to Strength and AP, with the Kiss providing D3 damage attacks.

Troupes got a reduction in points in the codex, and while still pricey when kitted out (up to 30 points a model), the base Trouper is only 13 points, allowing the Harlequins to have a few cheaper bodies. To further offset the fragility of the Troupes, they will most often be embarked in their Dedicated Transport, the Starweaver, which is mostly unchanged; it was good before and it still is. Troupes in Starweavers will form the backbone of most Harlequin lists in both a complimentary and main army role.

The last two units I want to touch on are the Elites choices, the Death Jester and the Solitaire. The Solitaire still is a cruise-missile of a combat monster, and went down a handful of points. The Death Jester is a shooty character who dropped a whopping 30 points. His Shrieker Cannon weapon has a single shot option that can do D3 Mortal Wounds after killing an infantry model. Further, target units then suffer a -2 penalty to their leadership after suffering casualties. This ability, while fluffy, was previously way too expensive to put the Death Jester into consideration, but now with his massive points drop he is one of my sleeper picks in the army.

As with all codexes before it, the Harlequins now get a “Chapter Tactic” equivalent, a Masque Form, with six options to choose from. Each Masque comes with its own strengths to compliment those in the base army, as well as Warlord Traits, Relics, and Stratagems to build on their particular flavor.

The Masque of Midnight sorrow allows units to essentially Advance while Falling Back, as well as Consolidate 6”. For an army that can almost entirely fall back and still shoot and charge, and also wants to avoid being shot as much as possible, this trait is very strong. Their Relic, Stratagem, and Warlord Trait all add a couple minor or temporary boosts to output in combat. Some of the ways I see this Masque being used is both in Harlequin Troupe heavy builds, as well as in a cruise-missile style complimentary force featuring a unit of Skyweaver bikes or a Solitaire designed to disrupt enemy lines while the main force of Drukhari or Craftworld units stay further back and lay down fire.

This Masque relies on misdirection, and while their trait can be powerful, it’s also complex and extremely variable. Similarly, their other Masque specific items and attributes are a bit more flavourful than directly powerful. As a result, I don’t anticipate seeing this Masque used terribly often.

This is the direct, to the point, all out combat focused Masque. Models with this trait get and additional attack the turn they charge. Their stratagem furthers their direct assault potential by giving a bonus to wound rolls against Infantry, Beasts, and Bikers. An army or detachment of these killers is, similar to Midnight Sorrow, going to focus on closing quickly and maximizing their offensive output in combat, likely including mostly Troupes with some supporting combat characters. As a complimentary force I could see a Patrol of a Shadowseer and Troupe Master with a maximized Troupe on foot, using the Twilight Pathways psychic power to launch the unit into combat as soon as possible and deal as much damage in a combat alphastrike as possible.

This masque gives a bonus to shooting Pistol weapons for units that Fly or are embarked on their Transport, counting them as Assault weapons and ignoring the -1 to hit when Advancing and firing. Their Warlord Trait, Relic, and Stratagem all feed into a style of Troupes loaded to the nines embarked in Starweaver transports. The stratagem allows a unit to consolidate toward and embark on a Starweaver nearby, while the Warlord gets to disembark after the Transport moves. Finally, the Relic speeds up the Transport, adding 6” to its movement, and guarantees the occupants can disembark safely when it is destroyed. A Soaring Spite force can take advantage of all of these elements to dart forward 28” and fire six fusion shots at close range to any target they desire.

Dreaming Shadow models gain the ability to hit back before being removed, firing a single weapon or making a single attack on a 4+. An army wide Space Marine Ancient aura is not to be discounted, particularly in an army of fairly expensive models. Their stratagem is tailor made for a Death Jester, allowing a character to double their hits in shooting. Combined with the Relic being a special gun for a Death Jester, there definitely seems to be a focus on making that character work in this Masque. This masque may been most often fielded as a complimentary force of a handful of Harlequin characters added in to a wider-Eldar army through a Vanguard detachment, though they do have the tools to work in a standalone force as well.

The last of the Masques, units from the Silent Shroud provide a Leadership penalty to nearby units, and force morale checks to be rolled with two dice, discarding the lowest. Their stratagem can be particularly powerful as it allows the Harlequin player to deny overwatch against one of their units. Combined with leadership debuffs elsewhere in the army, this Masque can be devastating against some foes. However, it will be limited by the fact that many army builds in the meta just don’t care about morale, either fielding small units that rarely can fail morale at all, or just many sources of immunity to Morale.

Of the six Masques, I expect Frozen Stars and Midnight Sorrow to be the most popular, as they’re the most straightforward. However, I fully suspect that veteran Harlequin and Eldar players will be able to get a lot out of armies of mixed Masques or small complimentary detachments of Soaring Spite or Dreaming Shadow Harlequins.

With only a handful of units in the army, Harlequins are going to struggle to work as a standalone force in a competitive setting. However, they are extremely well equipped to do what they want to do, which is to close very quickly and do crippling damage while in close. They are nearly impossible to pin down and so while they lack durability and numbers, they have the speed to play a cagey game and reward are good general, hiding and pouncing on exposed elements before fading away to snag late game objectives.

If you’re looking to start up a Harlequins army, definitely start with a thorough reading of the Codex. As an army they are one of the furthest things from a blunt instrument you can get, instead needing to be wielded as a scalpel. If you’re facing off across from them, expect them to be able to hit extremely hard and close the gap alarmingly fast, and have a plan in place for mitigating their impact.