Premeasuring is a Measurment of Success!

Facebook
Twitter
Pinterest
There are some things every 40k player does to improve his or her game. Arguing rules on the internet with strangers and trolls for hours, spending hours in battlescribe trying to shave off those pesky last 638 points to make your list fit, and relentlessly blaming dice for why you lost are all typical outlets for many players. But there’s one thing most 40k players don’t do that they really should: Premeasure. Everything. One of the key differences between top players and the rest of the field is the amount of things they premeasure. Most players will premeasure basic things like range before they declare a target to make sure they don’t accidentally choose a target they can’t shoot at. But that’s just the tip of the iceberg. Identifying what to measure This is the hardest part of premeasuring, because if you don’t think of the opportunity you’ll never even know you missed it and subsequently won’t think of it as an area to improve upon. This is mostly only addressed by practicing more and trying to be extra conscious about what to premeasure during a game. Below I’ve compiled a list of key things that I typically measure to give you guys an idea of what to look out for in-game, but bear in mind that this list is not exhaustive and every game is different and will contain different opportunities for things you should be premeasuring.

-Objectives As a Chaos Marine player I have access to the Tide of Traitors stratagems, allowing me to take a unit of Cultists and place them within 6″ of any board edge on any given turn. So when placing objectives I always look for opportunities to put objectives within 9″ (6″ from tide + 3″ from objective controlling radius) so at any point I can instantly come out of nowhere to claim an objective. Another common tactic is to put an objective 6″x6″ in the very corner of your deployment zone. This is especially effective in vanguard in quarters as it maximizes the distance between the opponent and your objective. In some missions you’re often forced to put an objective in your opponent’s deployment zone, so one trick you can do is premeasure 18″ in from the very corner of your opponents deployment zone and place the objective there. This will prevent your opponent from being able to put an objective in that magical 6×6 spot (as it will either be within 12″ of your objective or 6″ of a board edge, and it will completely prevent him from making use of the back most section of his deployment zone. This will in turn force you opponent to place his objective closer to you which ends in a net advantage.

-Deployment I always try and measure my opponent’s threat ranges. If he has an Exorcine with devastating 36″ if he doesn’t move or mediocre 42″ range if he does I can simply measure 36″ from said Exocrine and not deploy there. Maybe in some situations you can’t escape range because things like Dark reapers have an effective 54″ range. What you can do is maybe measure what their potential line of site is and measure around that. Imagine dark reapers staring at a classic center los blocker. Their options are either move to the right of it or move to the left of it to gain los. So you may be able to find a theoretical spot where even if he moves his reapers as far possible left he wouldn’t be able to get los to a unit despite having range to it. The real key here is understand threat ranges intimately and act accordingly. Don’t be afraid to ask your opponent how far he could potentially move a unit, including any psychic powers or stratagems his army may have allowing him extra positioning. 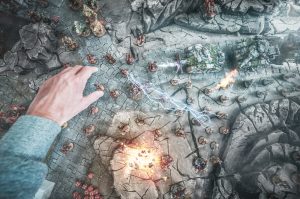 -Movement Imagine you are the Dark Reaper player in the previous deployment situation. You should probably measure to see if your opponent deployed in that magical spot to evade your LOS before just moving anywhere you like. Often times I figure out how far my squad is from it’s target before I move to remove any ambiguity. If I’m trying to shoot something that’s 29″ away with my Tactical Squad of Bolters and I premeasure before moving any models, I know that if I move 6″ and shoot 24″ I’ll have range. However, if I also have to spend 2″ moving sideways to get LOS, I know I won’t have range so maybe I’ll just run instead. Similarly, if I know I’m trying to get my Berzerkers out of a Rhino to charge a unit of Fire Warriors I’ll work it out with my opponent before I move anything to avoid any potential “You moved too far!” arguments. Imagine the Fire Warriors are 17″ away from the edge of the rhino (which you determined by premeasuring). Before disembarking I will verbally state the distances involved: I’m disembarking within 3″, the base takes up a bit more than 1″, and then I’m moving the Berzerkers 6″ directly towards the Fire Warriors. The Berzerkers should now be slightly past 10″ from the edge of the Rhino, meaning I need to roll a 6 in the Charge Phase to reach them as that will put me within an inch of the unit.” By stating all of this before touching anything, we now are in agreement of what the charge required is, in case a model gets bumped because I dropped my rum & coke on the table. Having these kinds of conversations with your opponent will reduce the amount of in-game arguments you have 10 times over and also make the game speed up a lot. Important Caveat! Make sure when you reveal intent like this, you do it at a point in the game where your opponent can’t do anything about it. Typically this means during your turn. Premeasuring on your opponent’s turn may help you plan what you’re going to do on your upcoming turn but be sure not to give away your tactics by pulling out your tape measure to compare where the Fire Warriors are in relation to your parked Rhino.

-Psychic Phase Please, please, please don’t be in Deny the Witch range when you don’t need to. It’s so easy to ask your opponent where his psykers are and then move yours to outside of 24″ of them. Getting a key power like Warptime, Quickening, or Word of the Phoenix denied because you were careless about measuring Deny range is the dumbest way to lose a game. Another key consideration is Smite. Smite (and many similar powers) always target the closest unit. Be careful about how you move to make sure your psykers are smiting what you want them to, especially when trying to get multiple Smites onto the same target. Also be careful about Smite range to make sure that after you kill the initial unit with Smite, any remaining Smites still go somewhere useful. Naturally you can’t do anything about that sometimes, but do what you can.

-Shooting Most of your shooting premeasuring should be done in the Movement Phase before you even move anything. But be sure to understand that when you start shooting things your opponent gets to pull casualties as he sees fit, so try and anticipate that when you’re choosing the order and targets of the units you’re shooting with. This doesn’t mean always shoot with the furthest away unit first. For example, if one of your units has models just barely in rapid fire range while another unit has long range that will be unaffected by any casualties in the target unit you should obviously shoot the rapid fire guys first. -Charging a Shooting Target Be very careful about shooting at a unit you were planning on charging later that turn. Take the Berzerkers charging Fire Warriors example from above. If the ‘zerkers decide to take some shots at the Fire Warriors and kill 1-2 that charge might go from the comfy 6″ to a hefty 8″. One thing I like to do is measure my distance to the closest model, and the second closest, and third closest. That way I know how much wiggle room I have to plink some models before it affects my distances. One of the biggest misplays you run into is when a player kills his primary shooting phase targets ahead of schedule and decides to use remaining available shooters to go after a unit he needed to make a charge on. Even in 8th edition, sometimes you have to just say no to shooting. There are so many more instances of premeasuring, but they just get more and more corner case specific like particular faction abilities. The more you try to incorporate premeasuring into your standard gaming the easier it’ll be for you to spot the edge cases. Remember, the more you can mitigate the impact of dice variance in your games the better you will be at 40k, and premeasuring is a fantastic way to remove dice as a variable from a lot of situations. If you want more specific help about premeasuring or any other tactical insights I strongly recommend joining Nights Pro which is my personalized 40k coaching program!

Become a Master of Warhammer 40k

( And Get the World’s Best Spill-Proof Painting Mat )