This week’s pre-release from Games Workshop brings us another round of Stormcast Eternals and Nighthaunt minis. The models are basically additional units for your Age of Sigmar army, adding more variety to the way you play or to your collection (if that’s your kind of thrill).

It doesn’t matter which army you’re playing, these week’s minis will significantly give you a boost in powering through Age of Sigmar’s Soul Wars. 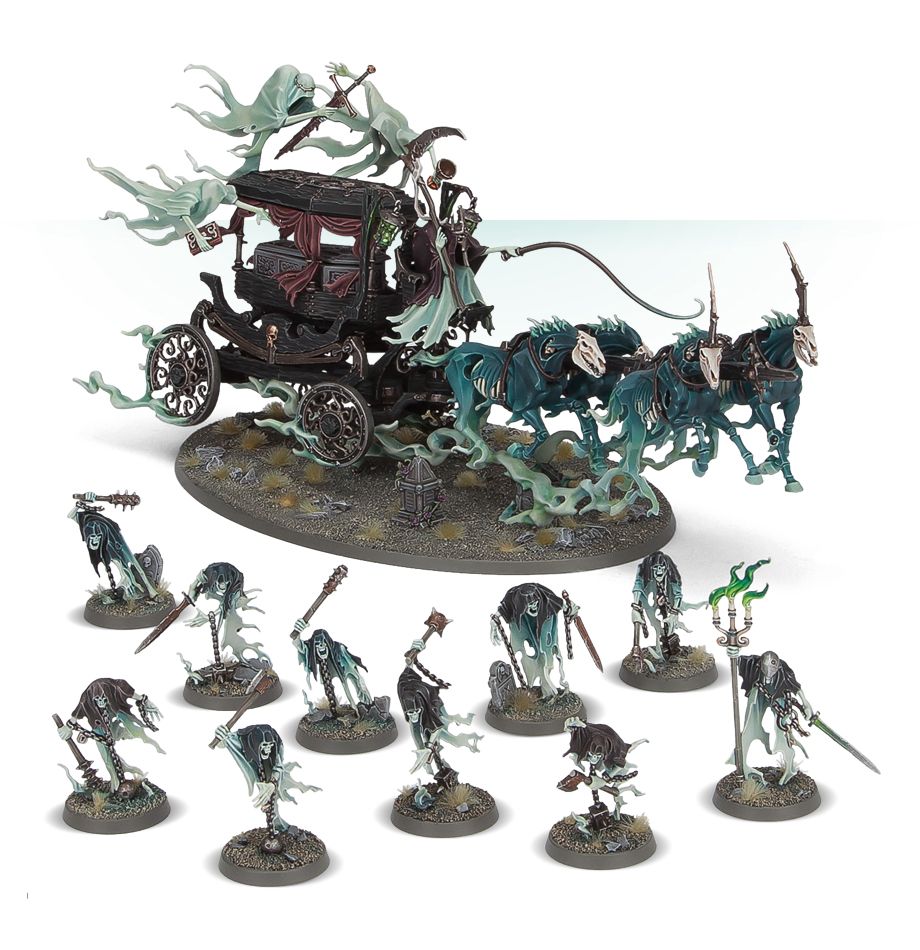 Collect together each of the Nighthaunt miniatures on pre-order this week in one click with this bundle – 2 sets of grim and ghastly models sworn to cause the demise of everything that lives. Included: 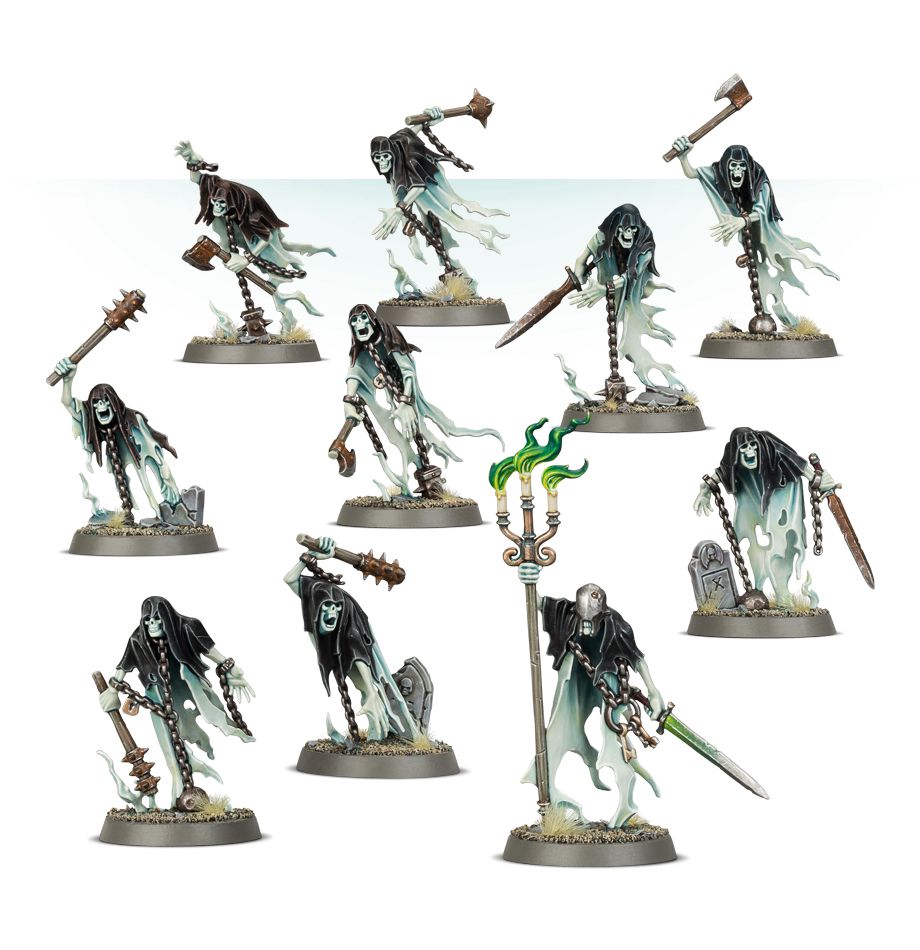 Each essentially a floating headed cloak, from beneath which twisted skull-face glares – armed with malignant weapons – swords, axes and spiked maces.
The kit includes options for a Dreadwarden; this is the unit leader, face locked in an iron helm, carrying a large candelabra along with a set of heavy iron keys;

The Chainrasps minis and Black Coach can both be purchased individually for $40 and $115 respectively.

There aren’t any bundles for the Stormcast Eternals in this week’s pre-order. As the minis will be sold individually. 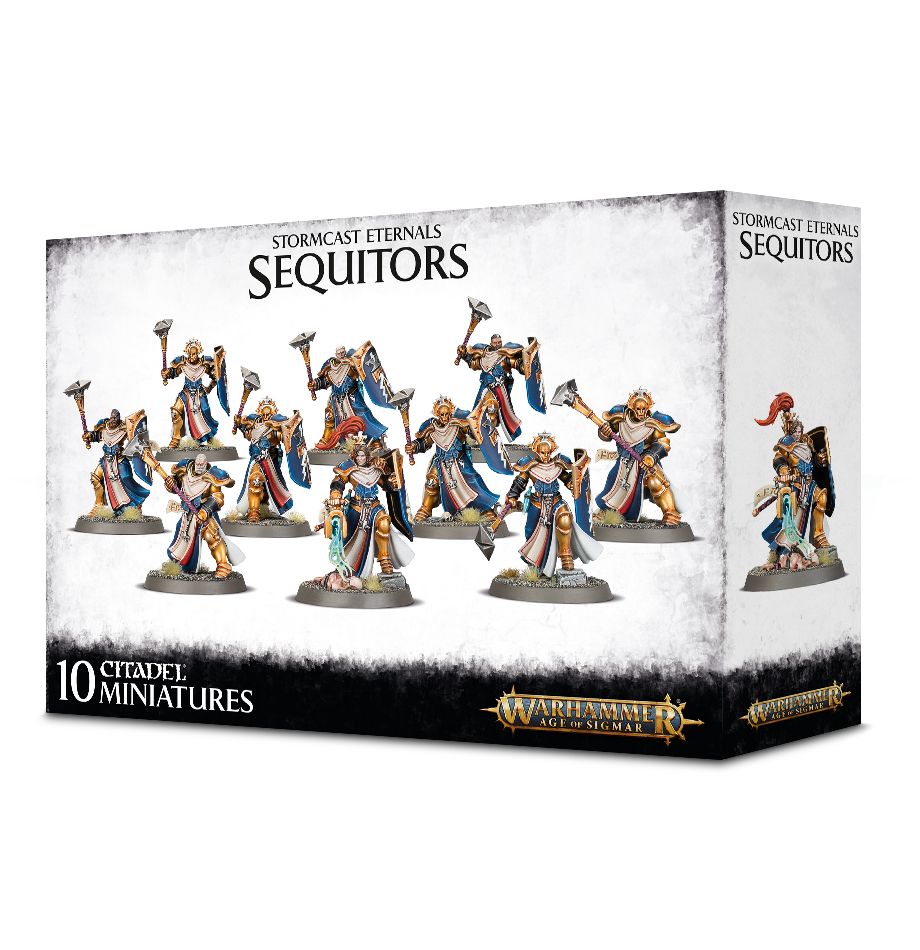 This multi-part plastic kit contains the components necessary to assemble 10 Stormcast Eternals Sequitors. Specialising in the despatch of the ethereal enemies that haunt the mortal Realms, they wield stormsmite mauls and soulshields, or tempest blades and stormshields – enough weapons are provided for any combination of these you choose, with a further 4 stormsmite greatmaces available. 4 of the models are female with 6 male; all wear thick, heavy armor, long robes and tabards, with sigmarite icons hewn in metal above their helmets. Each model can be assembled with a bare or helmeted head and can feature pointing arms instead of their shields, and feature a blank left shoulder pad allowing you to depict the symbols of whatever stormhost you desire.

4 of the models can be optionally built as Sequitor-Primes – male and female variants – who have options for redemption caches, shown depicting the soul of a Bloodreaver being torn from their bodies – stowed weapons are included should you choose to build this particularly evocative pose. The Primes have their own specific bare heads, tempest blades, shields, shoulder pads, and collars.

This kit comes as 168 components and is supplied with 10 Citadel 40mm Round bases and a Stormcast Eternals transfer sheet. 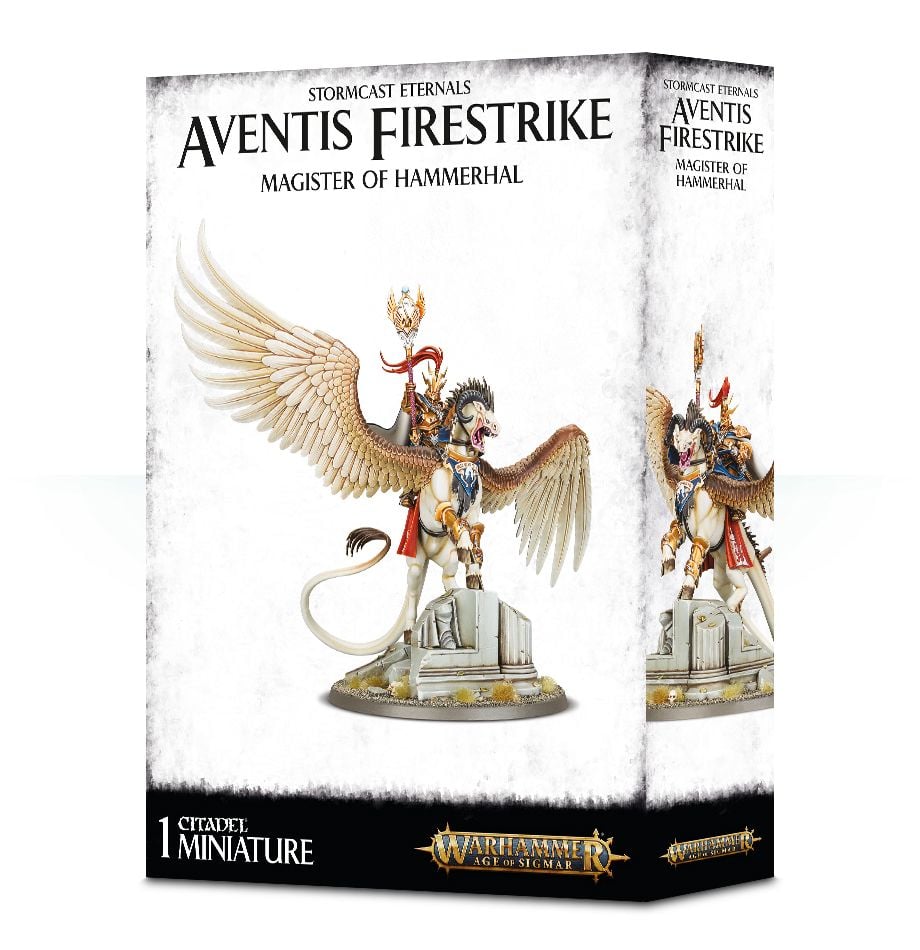 This multi-part plastic kit contains the components necessary to assemble a Lord-Arcanum on Tauralon. Armed with an aetherstave and spirit flasks, he rides a Tauralon – this great beast has an impressively wide wingspan, with a dense skull and thick curled horns. This mount doesn’t require a huge amount of armor, with but a few pieces of metal around its legs and a chest plate featuring scrollwork and a sigmarite comet; the creature is depicted rearing over a set of sigmarite ruins, which are part of the base. The Lord-Arcanum is rather more densely armored, covered in sigmarite plate, with lightning bolt symbolism adorning the surfaces up to and including the sword and scabbard at his waist.

Alternately, this kit can be used to assemble Aventis Firestrike – a specific Lord-Arcanum who rides a unique Tauralon named Loithar. When assembled as Aventis, this kit also makes an extra Lord-Arcanum on foot.

This multi-part plastic kit contains the components necessary to assemble Aventis Firestrike, a Lord-Arcanum on Tauralon. Armed with the Staff of Hammerhal, he rides a specific Tauralon known as Loithar – this great beast has an impressively wide wingspan, with a dense skull and thick curled horns. This mount doesn’t require a huge amount of armor, with but a few pieces of metal around its legs and a chest plate featuring scrollwork and a sigmarite comet. Aventis himself wears the Thunderhead Crown, an ornate helm featuring lightning bolt-shaped spikes, and carries spirit flasks as part of his sigmarite armor – this is covered in detailed iconography, as is the sword and scabbard at his waist. Loithar is modeled with one hoof standing atop the ruins that form part of the base. The kit also contains the components needed to assemble an extra Lord-Arcanum on foot – armed with an aetherstave and spirit flasks, he stands atop a base of sigmarite ruins and can be modeled casting a lightning orb.

This kit can optionally be used to assemble an unnamed Lord-Arcanum on Tauralon instead of Aventis Firestrike – this has its own head, shoulder and leg options for the Tauralon.

That’s it for this week’s Pre-release! Be sure to check back with us for more!