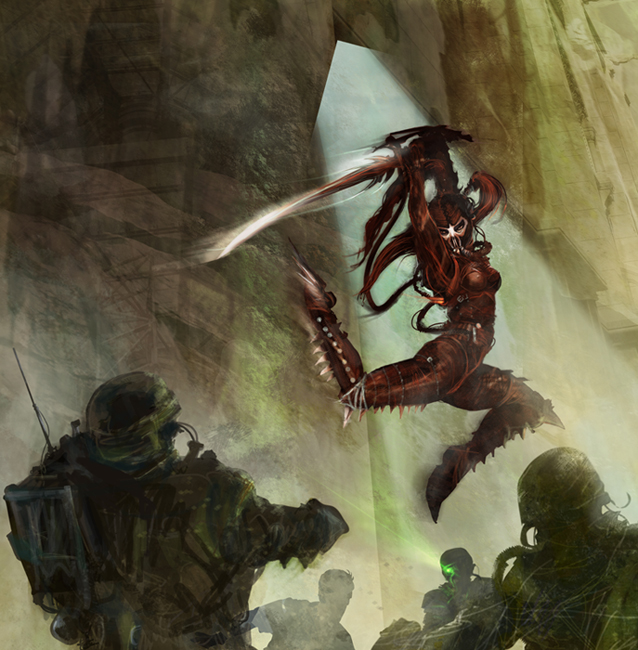 This is your definitive source for Harlequins Lore Warhammer 40k. The Harlequins are a faction of the Eldar species who are in charge of recollection in the warhammer age. They travel from Craftworld to Craftworld, performing dance, theatre, and martial arts to keep the Eldar race’s legends and old history alive. The Harlequins are both servants of the Laughing God, the only god of their species to escape the Great Fall, and keepers of the venerable Black Library of Chaos.

There is no distinction between art and combat for the Harlequins; they are the quintessential warrior poets, traversing the Webway’s labyrinthine expanses, giving enlightenment to their audiences while ensuring the death of the servants of evil.

The Harlequins army, also known as Rillietann, are a peculiar subsection of the Eldar species who alternate between being skilled battlefield fighters and entertaining audiences on stage. They form outside of conventional Eldar civilization, with no allegiance to any Craftworld, Kabal, or other form of authority other than their own belief in Cegorach, the Laughing God, the Eldar deity.

5 – The Dance Without End

Harlequins army have been around since the time of the Eldar Empire. They initially arrived in the pre-Fall Eldar’s hedonistic revelry to perform their ancient mythological dances. These activities were intended to remind their people of what they were discarding. However, many members of their audience were hostile, forcing these early Harlequins to learn how to fight in the early warhammer age.

Cegorach, the Laughing God, escaped Slaanesh’s wrath during the Fall of the Eldar. Cegorach’s disciples were safely hidden within the Webway and escaped the calamity unscathed. The Harlequin troupe, on the other hand, disappeared into the Webway shortly after the Fall on an unexpected journey to prepare for a conflict that would absorb their entire future. The Harlequins made a stunning comeback in M33, when the Harlequin Masque of the Midnight Sorrow broke from the Webway onto the world of Llayen Nuadh, driving back an army of Slaaneshi Daemons while also rescuing Ulthwe soldiers.

Since their first emergence after the Fall of the Eldar, Harlequins have performed a variety of self-appointed roles with distinctive likenesses thereof, the most important of which is putting on theatrical plays of Eldar history. Cegorach is one of the few Eldar deities thought to have survived the Fall in some fashion, therefore their religion is entwined with it. The Harlequins entire army think that his inherent light-heartedness kept him away from the depravity and corruption that formed Slaanesh, and that he still exists today, often in the appearance of a Harlequin troupe, with those who come into contact with him only realizing his presence after he has left.

Harlequins entire army continually tour the territories of their species (as well as other places; Harlequins feel other species should be given the Eldar’s stories as well) in their mission to perform because the Eldar are a dispersed race. The Harlequin troupe are said to have a fast attack and are the deadliest combatants of all the Eldar, so their dual nature serves them well while they’re out in the galaxy. Their acrobatic and deceiving abilities, as well as their one-of-a-kind weapons and equipment, make them such mysterious and fearsome adversaries that they have been absorbed into the mythology of some of the galaxy’s less evolved civilizations as magical spirits or eldritch monsters.

The Recruitment of Harlequins

Harlequins are not born; they are all recruited from the broader Eldar culture, whether Craftworlder, Dark Eldar, or Exodite. Some are said to be attracted from the midst of throngs, drawn into the shadows by a masked person that only they can see. Others simply disappear from their private quarters. Others are kidnapped while attending a Harlequin play, lose a wager with a Troupe Master, or follow weird laughter into a Webway Gate. As a result, there are bizarre and cautionary legends about the Harlequins in every Eldar society.

Whatever method is used to become a Harlequin troupe, it entails deleting everything that has gone before, including friends, family, and purpose. Every facet of an Eldar’s previous identity is destroyed once they become a Harlequin, regardless of how it happens. Each person joins a Light, Twilight, or Dark Troupe and is assigned a new position by their Troupe Master. Every aspect of the Harlequin’s new personality is informed by these roles, which are each recognized by a ritual character name such as the Sun Prince, Shaimesh the Poisoner, or Webway Witch. Similarly to how the Eldar in the Craftworlds channel all component of their psyche into a single Path, the Harlequins focus solely on their assigned job. This process of becoming their “true” self, known as the Theyldh, is significantly more intense than anything experienced by any other performer in the galaxy.

The Webway, a quasi-dimensional construct of the race known as the Old Ones, allows Harlequin troupe to travel around the cosmos. Cegorach is claimed to be the only being on the planet who knows every webway portals. Because the Harlequins roam the webway without fear, appearing and disappearing at leisure, this could explain how his students have such intimate knowledge of its twists and turns. Many other Aeldari have credited the servants of the Laughing God with supernatural powers due to their knowledge of the webway’s secret passageways. The Harlequins walk their opponents and strike from unexpected angles thanks to their understanding of the webway’s hidden passageways. Harlequin masquerades as a whole can be ambushed in this manner, ensuring the element of surprise.

The Harlequin troupe are said to be among the few who know where the mythical Black Library is hidden and can assist protect it from attackers.

A crystal tome wrapped with chains of light has rested on an obsidian plinth at the heart of the Black Library since the Fall of the Eldar race. Those shackles vanished one by one as mythical events occurred, until the tome opened right before the Great Rift erupted.

Writings alleged to have been penned by Cegorach itself were revealed within, telling of a last act that completely transformed the story of the Fall. Instead of Chaos’s ultimate victory in the Rhana Dandra, the final act talks of Cegorach’s ultimate joke, which would tempt Slaanesh to waste all of her energy to save the Eldar rather than kill them. It’s unclear how such an occurrence may occur.

The Dance Without End

As the dance approaches the Fall’s conclusion, the Solitaire appears as Slaanesh. Seven figures emerge from behind Slaanesh, one by one, to mingle with the old race. Four Mimes, dressed as demons, emerge first and pass on their seductive and frightening moves to the rest of the dancers. Second, three black figures, the Death Jesters, jump and slaughter among the fallen gods, bringing their motionless remains to Slaanesh’s feet, their suits displaying skeletons.

The Warlocks emit a mental scream when the last god falls, which reverberates across the audience.

The scream transforms into a deranged and depraved laugh. There is another, ironic laugh within the laugh when the High Avatar enters. He strolls nonchalantly onstage as the Laughing God, laughing at the fallen’s cosmic stupidity.

He gets lost among Slaanesh’s servants for a minute, but then leaps clear of their tumble to face them. He frees one of the dancers from Slaanesh, the writhing figures on the dancer’s suit melting and taking on the Laughing God’s lozenge pattern.

Slaanesh faces the Laughing God after the rest of Slaanesh’s servants perish or flee. The seemingly endless conflict comes to an abrupt conclusion, unsolved.

Harlequins have no official leaders, as they are a group of like-minded players who are all acutely aware of their roles.

They travel the galaxy as masquerades. A masque consists of an army and a company of Troupers, as well as specialist entertainers.

A Troupe is a group of ordinary Harlequins known as Troupers that have chosen a role in the Light, Twilight, or Dark and are commanded by a Troupe Master.

Despite the lack of a formal military chain of command and little instruction on the battlefield, Harlequin masques work with merciless efficiency, able to act with tremendous cohesiveness and cooperation.

The Saedath or Masque Form is the battlefield counterpart to each of the Masque’s mythic plays. These are essentially a strategic war plan with an allegorical element that inform target priority, overall strategy, and which troupe division will lead the conflict. The right Saedath is chosen according to legendary cycles, ritual significance, or even the time of day.

Some Saedath’s are closely associated with a Masque :

Other famous Saedath can be performed by any Masque :

Harlequins are known for their unusual costuming and equipment, particularly their Agaith; false-faces. With the exception of the blank Shadowseer masks, these masks are richly decorated and equipped with various Eldar kinds of auto-senses and respirators.

Avatars usually have a more advanced version with holo-generators, which allows them to not only adopt a variety of styles, but also record and playback what the Harlequin has seen. This is typically used to replay an enemy’s dying agonies… to other opponents. These demoralizing gadgets are known as marathags (“Face of Death”).

Harlequins are elegant and lithe even when compared to other Eldar; they supplement their natural prowess with ‘flip-belts,’ which create a small anti-gravitic field around them and allow them to leap unnaturally high.

They also wear holo-suits, which are advanced armour substitutes that help theatrical performers When the Harlequin is put to battle-conditions, their picture is broken into a cloud of crystal shards that whirl and swirl around with vigour proportional to the Harlequin’s speed.

The Harlequin troupe are also known for their dangerous battle weapons. The Harlequin’s Kiss, which resembles a sharpened tube tapering to a wicked tip and fastened to a warrior’s forearm, is the most horrifying of these. Monofilament wires are used to fill the tube.

The wires uncoil and thrash around when the Kiss is pounded into a victim, ripping the body apart from the inside.