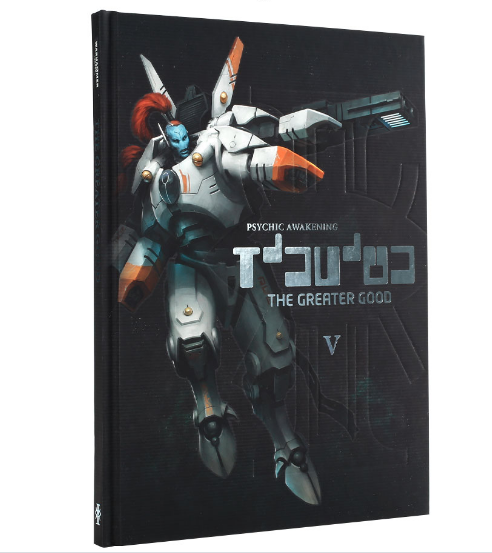 Well it’s the week of the release of the New Psychic Awakening Book, The Greater Good. We are going to be keeping our eyes peeled for all the new release information and updating you as it’s released. So lets dive into some of the information we have managed to gather on all the new stuff coming your way.

This supplement will be focusing on three armies in particular. Namely the Imperial Guard, Genestealer Cults, and the T’au Empire. With some special attention being paid to the T’au in particular, plus they are getting an updated model for a fan favorite.

Oh boy, this new and updated model looks awesome. However its not all just looks, she is also getting her rules and wargear updated as well!

The updated fusion blaster is quite nice, and the updated drones are actually really awesome. The fact that these special new drones give everyone within 3″ a 6+ FnP is great, plus you can always keep Shadowsun near some shield drones in case you want to pass of some wounds. However, the biggest upgrade is by far the fact she can now be taken in any T’au army. Thats right, you can now bring her along in any T’au detachment without the rest of your army losing their sept trait.

This is a spicy one! Do you know who would enjoy this one? (hint: look at the picture). That’s right, Riptides!

Now that’s all for today, but keep checking back for more updates as they are revealed throughout the week! We will make sure to keep updating this article as things are released from Games Workshop!

If you liked this article and can’t wait to get more awesome content like exclusive battle reports, painting tips from pro painters, and tactics from some of the best 40k players in the world, then you should become a member!

Included in the membership:

If you want access to ALL of this, then you need to become a member of the Nights at the Game Table by going here: https://page.nightsatthegametable.com/membership

As always a big thanks to Games Workshop for the images provided for our article.