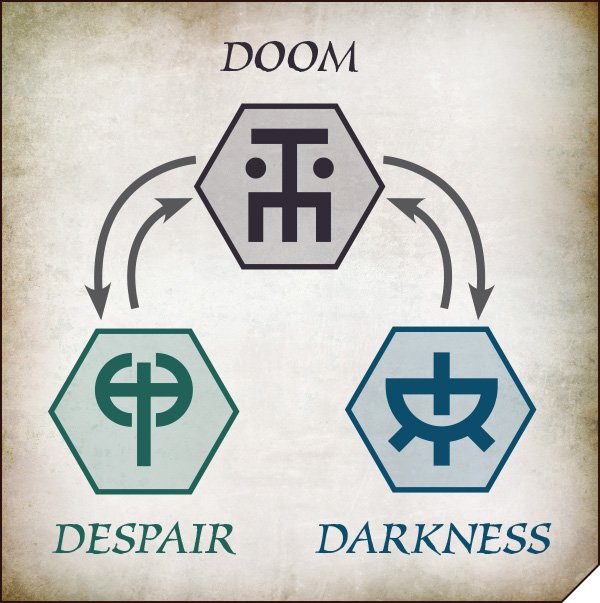 The Chaos Knights release is upcoming and Games Workshop has been slowly trickling out more and more information on how these behemoths will be stomping onto the battlefield. Some of the features that have already been announced include conjuring a Warp Storm and using the Favour of the Dark Gods. Today, however, we’re taking a look at even more sinister features.

In today’s release from Games Workshop we learn that if every unit in your army has the Chaos Knights keyword (unaligned and Agent of Chaos included) your army will become Harbingers of Dread. This ability brings together the cumulative effects coming from each Knight in your army. With this new ability at the start of each round you’ll choose an ability from one category: Doom, Despair or Darkness.

The Harbinger abilities, as they’re being called, come in a rotating pattern. If you choose Despair one round, you can’t choose Darkness on the next, you’ll have to go back to Doom.

You’ll always have to start with Doom, and you can roll with Doom all 5 rounds, but the choice from there will be up to you on how you use these abilities to weaken enemy morale.

The little skull icon indicates that this is a Dreaded Ability. These new abilities are found throughout the new codex and affect all enemies within Dread range. Normally, this stretches to 12″ but with Ruinous Powers they can be extended even further.

If you choose Despair on the second turn you’l have access to Creeping Dismay which lowers your opponent’s range as described above.

Or maybe you chose Darkness second round. If you did you can then choose from a Darkness ability… like Pall of Darkness. Blotting out the sky with pure terror this gives a penalty to your enemy’s hit rolls.

Next up is this Despair ability Paralyzing Insanity. Keep your opponent from scoring this round by removing their Objective Secured ability. Scary stuff indeed.

Of course we wouldn’t be finished without this final Doom ability Horror of the Warp. Because who doesn’t want to unleash the horror of the warp upon their foes. This ability, which makes Combat Attrition tests much more difficult also stacks with Dread Host. Your foes will flee on rolls of 3 or less and unmodified 1s causing an extra model to follow their other cowardly friends.

Chaos Knights are set to release very soon and you’ll have serious choices to make each round with these new abilities.