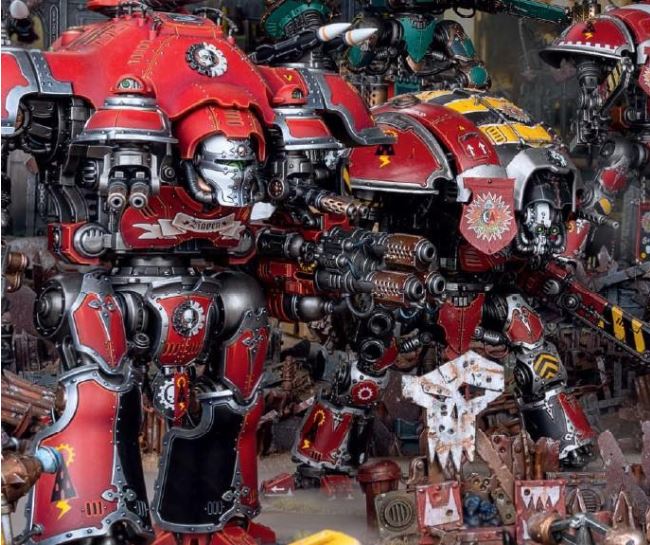 Fans of the hard-hitting Imperial Knights have an even bigger reason to rejoice: The preceding week has been bombarded with Imperial Knights rumors and leaked photos, and seems like all those pointed to the imminent release of the new Knight codex.

Following these rumors, GW has finally announced the pre-order of the Knights codex, which will be available June 2nd. They also dropped a few official images on its new models –  the chassis for the Knight Castellan or Knight Valiant and the Dominus-class Knights.

Here’s a low down of that Imperial Knights announcement from GW:

1. As expected from the Imperial Knights, the upcoming models look as beefy as they ought to be.

2. Part of their arsenal is all the new Knight Weaponry that’s expected from such a hearty chassis.

3. One of its weapons looks like that Knight flamer weapon, which was rumored to deal 3d6 hits (fitting since there are three flamers) all at Strength 7, for 2 damage each.

4. On the other hand, they’ve got this crazy harpoon. Based on the previous rumors, this does more damage against larger targets. The bigger the targets, the bigger the damage. If you’ve ever wanted to live out your dream of being Captain Ahab while piloting a 6-ton war machine, now is your chance!

5. The Dominus-Class Knights are armed for bear and can be considered as the new Armiger Helverin who come three to a Lord-of-War slot and are fast, long range fire support type guys.

6.The Dominus looks as delicate as Aeldari.

7. The upcoming book features a diverse yet powerful faction abilities that lets you customize your collection to suit your style. You will be able to represent that on the table top with nine new household traditions.

8. The book also features tables for generating your very own Freeblades, complete with epic but tragic backstories.

9. The renegades are coming back!

That rounds up GW’s complete announcement over the weekend. However, we could surely expect more in the coming days as the said pre-sale date gets closer!