Fresh off his victory against Eve last week, it would appear that Adam and his Deathwatch troops are on a warpath against the Necrons. This week at Nights At the Game Table, Adam is taking on John Cook and HIS army of Necrons, with each group fighting for control of the marker in this Prize match. It’s a classic tale of Capture the Flag, only with more guns and firepower than many would ever believe possible! 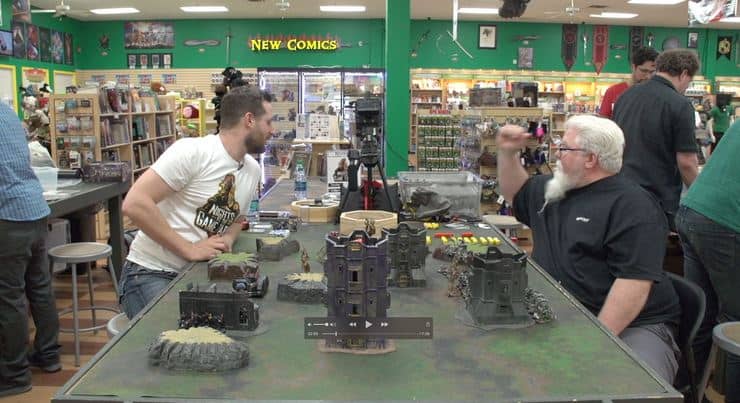 As always, Adam has arrived at the battle with a variety of the Deathwatch’s most elite forces. His Watchmaster and Watch Captain are heading the fight, backed up with a squad of Intercessors and a strike force of seasoned Veterans packing frag cannons, as well as a heavily-armed Razorback transport. Of course, anyone who knows Adam and his army can guess that he’s also bringing his nigh-unstoppable Leviathan Dreadnought to bear. This beast of a mech ripped through Eve’s units like tissue paper last week, so only time will tell if John will be able to bring this Goliath down.

Of course, John’s come fully prepared to do just that. He’s come equipped with two squads of warriors (one armed with Gauss cannons, and the other with Tesla cannons), as well as a diverse band of savage fighters including a Cryptek, Overlord, Tomb Blade, and a swarm of Scarabs, all under the command of a Catacomb Barge. Clearly, he’s intending on bringing the pain from all angles.

As the battle begins, both parties seem to be favoring an age-old Warhammer tactic when it comes to Prize matches: the other team can’t get the marker if they’re all dead. Adam took the first turn, moving his Veterans and Intercessors to the high ground, providing cover and visibility as the Razorback and Leviathans lumbered forward, intent on engaging John’s forces head on. Combined fire from the Leviathan, Razorback, and Watch Captain decimate John’s immortals, sending many of them crashing into the dirt before they can even more.

At the same time, Adam’s veterans engage in some crowd control, using their strategic positioning and frag canons to rip into John’s Warriors, riddling them with controlled bursts.

When his turn comes around, John chooses to buff his forces with Solar Pulse, negating the cover advantage that Adam currently enjoys. A barrage of Gauss rifle fire pushes back the Leviathan, while a blast from the Staff of Light held by the Overlord turns Adam’s Veterans into paste. Finally, the warrior charge into point-blank range, intent on ripping the Razorback to shreds. 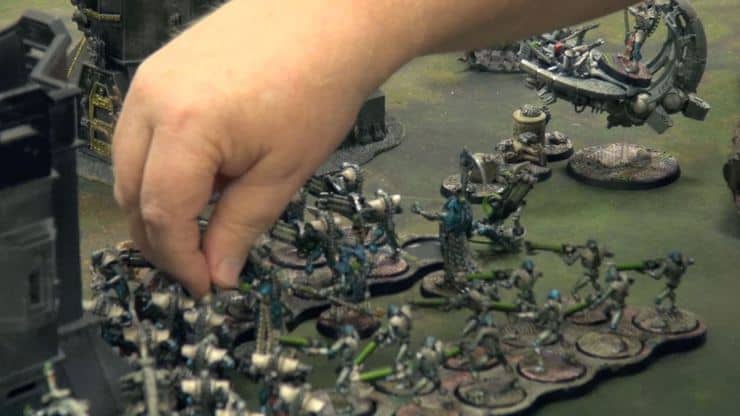 As the dust settles on the first turn, each army is looking battered, with no clear indication of who will be the one to take the Marker. Will John’s Necrons finally prove too much for Adam’s Deathwatch troops, or will the Deathwatch stamp out another army of Necrons?

Use the link below to watch and find out!