We got our first look at the new revamped disgustingly resilient, yesterday Warhammer Community gave us part 4 of their articles on the upcoming Deathguard release. This preview was the most important one yet! The rule which has completely changed! Let’s have a look, shall we! 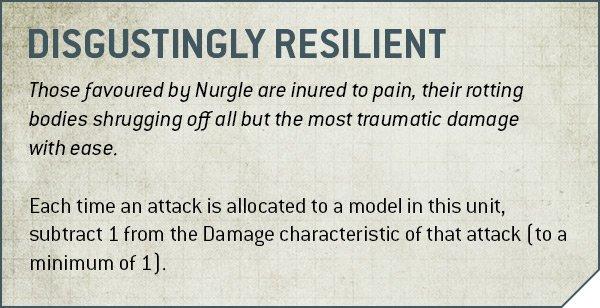 This is a significant change from what it was before. Originally disgustingly resilient granted Deathguard units a 5+ feel no pain save. This was a good rule that represented just how hard Deathguard are to kill in the 40k universe. The old rule gave us a  1 in 3 chance of ignoring each point of damage taken. Now Deathguard completely ignore 1 point of damage from every attack! Breaking down this rules change you will find there are scenarios which this is both better and worse. This rule change has initially been met with a mixed reaction by the community so lets look further into it!

The most apparent case for when this change is clearly worst is against damage 1 weapons. Before now you had a 33% chance of ignoring that 1 damage hit that got through your armour. Now you take that damage every time, which will be frustrating when your used to your FnP save. However, I don’t think this is as bad as it first seems. Plague marines and Deathguard in general are a very tough army. Single damage weapons are not generally designed to kill tough, elite infantry.

Weapons like hurricane bolters, flamers, heavy stubbers and bolters are designed to take down hordes and chaff. Units like Guardsmen, Termagaunts and Skitarii rangers should be worried about these, not plague marines. It’s also worth remembering that your plague marine is going to two wounds with the new codex. It will still take two 1 damage hits to kill one plague marine and even more for other units in the upcoming codex.

“But what about my poor Pox walkers!” Yes, with disgustingly resilient changing to -1 damage the zombie horde of Deathguard just lost their only save. The new trait is practically useless for them but don’t go shelving those models quite just yet! We do not have the full picture yet with the codex not being released until January. I would guess that in the new codex they will keep some form of FnP save, though this is pure speculation from the author.

Lets not forget mortal wounds! There are a few armies that rely on a large output of mortal wounds to do their damage. The likes of Thousand sons and Grey Knights being the most egregious culprits. The FnP save in these match ups was invaluable and often was the saving grace of Deathguard players. As it stands, this is a loss with the new disgustingly resilient rule. All we can do here is wait for the new Deathguard codex to see the other changes made. I know there’s already speculation about the Plague Surgeon becoming the DG equivalent of a Space Marine Apothecary. Will this happen? We don’t know but I wouldn’t be surprised if it did.

For this article I’m striving to remain as objective as possible to this rules change. However, I can’t help but get hyped over this change!

YOUR ENTIRE ARMY JUST GOT -1 DAMAGE BUILT IN!

This is so strong! But it’s only as strong as it is due to the changes coming to Deathguard. Your plague marines are going to 2 wounds each. Before now the perfect weapon to kill a plague marine was anything with high strength and 2 damage. Plasma guns and autocannons shined in this role but now as a Deathguard player you couldn’t care less about these. Lets look at the math:

Now lets look at your Possessed, Blight lords and Deathshroud. These units are all going to 3 wounds each. 3 wound models are the perfect target for thunder hammers and normally target number one. The new disgustingly resilient rule has now halved the efficacy of these weapons and any damage 3 weapons. It will take two going through to kill a single model, this is a huge change. To put that in game terms: a space marine captain with a thunder hammer and 6 attacks on average kills 0 – 1 terminators with the new changes. Overcharged plasma weapons had a chance of killing these models in a single shot with the old rules. The new changes mean it takes a minimum of 3 shots going through before 1 model dies. The new disgustingly resilient rule is great for all these models.

How about your vehicles? Well now every single vehicle you have has -1 damage against all incoming attacks. Yes, the feel no pain is gone but I feel this rule evens out nicely. All your Deathguard vehicles are still going to be as hard as ever to shift off the tabletop. They have now gained incredible resistance against damage 2 weapons, fully doubling the amount of wounds needed to kill one. This is statistically better than before. Damage 3 weapons are mathematically the same as before but damage 4 and up weapons are slightly worse. Overall for vehicles this feels more of a side grade based on what we know so far. I would argue that the consistency of a persistent -1 damage effect will prove better than relying on averages. Time will tell on this one.

Is the new Disgustingly Resilient better or worse?

The lost of a FnP save does certainly hurt in some instances but overall, I would say this is a stronger rule. The ability to reduce damage has always been strong, remember the Iron Hands ironstone relic anyone? Remembered how it got nerfed into the ground for being too powerful as a 6” aura from one character? Well now your entire is wandering around with an ironstone in their pocket. I also wouldn’t be surprised if DG had access to a FnP type rule in the coming codex. Either a character aura or a stratagem. Just imagine how strong that will be combined with the new DR!

If you are still lamenting the loss of the old DR rule and think this change is much worse then just hang on for the codex. I’m sure we’ll see plenty more positive changes for Deathguard then! January can’t come quick enough!

How to get more 40k tactics and tips for free!

This guide shows how to:
Get cheaper miniatures
Paint faster and still look great
Design an army that will be fun to play but hard for your opponent to wipe off the battlefield.

Warhammer 40k Space Wolves Tactics: Are Wulfen Worth It?

Upzone: Pop-up Terrain, Does it break?